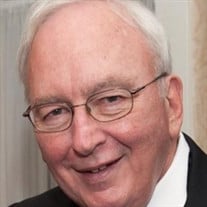 William Michael Reghitto of Andover, MA and South Dennis, MA, passed away peacefully at home on August 11, 2020, surrounded by his loving family and his favorite doo-wop and Christmas music, after a long battle with Parkinson’s Disease. He is survived by his wife of over 50 years, Judith (Travis) Reghitto of Andover; his children: Allison Reghitto of Boston; Brad Reghitto of Andover; Heather Reghitto Germain and husband Jason of Boston; Matthew Reghitto and partner Ziggy Castillo, her son Dimitri, all of North Andover; and his beloved granddaughter Lilah of North Andover; and many dear relatives and friends. Bill was born June 3, 1942, in Cambridge, MA, to the late Louis B. and Florence (Shannon) Reghitto. He was raised in Cambridge, MA and is a graduate of Bentley College and holds a MBA from Boston College. After college, Bill spent two years working at IBM in Kingston, NY, and then began a thirty-year career in commercial banking services at State Street Bank in Boston, beginning as a credit analyst in 1969, and retiring as an Executive Vice President of Commercial Banking Services in 1999. As a banker he was one of a kind - known for his business sense, ethics, and instincts. Bill was known for his philanthropy and shared his time and business expertise with many charitable organizations over the years including St. Augustine’s Church in Andover (Finance Committee); Abenaqui Country Club (Board of Governors – Treasurer); Catholic Charities; and the Boston Symphony Orchestra (A Company Christmas at the Pops where he performed Sleigh Ride on stage at Symphony Hall). Additionally, he served professionally on the Board of Director’s or as a Member of the Executive Committee at Brewster Wallpaper, Harr Auto Group, and BDC Capital. During his retirement, Bill was given the opportunity to join a thoroughbred horse racing ownership group, through which he was able to travel and watch his horses race at tracks across the country. He especially enjoyed our annual family trips to Saratoga Springs, NY every August. In 2019, he fulfilled a lifelong dream, when he watched one of his horses, Vekoma, race in the Kentucky Derby. Bill, who was also known by those who love him as William, Billy and Gramps, will be remembered for his generosity, and his love of family and friends, fireworks, and morning rides to the beach. In lieu of flowers, donations in his memory may be made to St. Augustine’s Church in Andover, MA; The Michael J. Fox Foundation for Parkinson’s Research; or a charity of your choice. Funeral arrangements are private. A celebration of his life will be held at a later date. Arrangements are under the direction of the John Breen Memorial Funeral Home, Inc., 35 Merrimack Street, No. Andover, MA., www.breenfuneralhome.com.

William Michael Reghitto of Andover, MA and South Dennis, MA, passed away peacefully at home on August 11, 2020, surrounded by his loving family and his favorite doo-wop and Christmas music, after a long battle with Parkinson&#8217;s Disease. He... View Obituary & Service Information

The family of William Michael Reghitto created this Life Tributes page to make it easy to share your memories.

Send flowers to the Reghitto family.