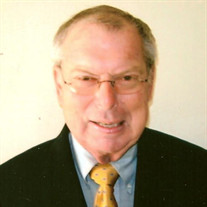 Brother William Chanel Lambert, FMS, a member of the Marist Brothers of the Schools for 61 years, ended his earthly journey to his Heavenly reward on May 26, 2018 in Mary Immaculate Nursing Home in Lawrence, MA. He was 79 years old. Brother Bill was born in Lawrence, MA. He attended the Marist Brothers Juniorate in Esopus, New York from 1953-56. He became a postulant with the Marist Brothers in 1956 and entered the Marist Brothers Novitiate at Tyngsboro, MA in 1957. He professed first vows in 1958 followed by his final vows in 1963. After completing his religious and academic studies at Marist College, Poughkeepsie, New York in 1961, he began his teaching career at Central Catholic High School in Wheeling, West Virginia where he also served as Principal from 1965-71. He earned a Master’s degree in Educational Administration from West Virginia University in 1967 From 1971-78 he served as a Guidance Counselor and as Principal at Central Catholic in Lawrence, MA. His influence at Central continues to be felt today. He was Assistant Superintendent for the Archdiocese of Boston from 1978-88 during which time he earned an EdD in Educational Administration from Boston College. From 1988-2005 he was instrumental in developing the First Year Experience Program of Boston College. Through his work at BC he developed a lifelong friendship with Fr. Joseph Marchese, Fr. Anthony Penna and Philip DiMatia. In his retirement, he enjoyed volunteering at Lazarus House in Lawrence, MA. All those who knew Bro. Bill will recall his love of all Boston sports teams including his beloved BC Eagles. Brother Bill was the loving son of Leo and Theresa Lambert of Methuen, MA who predeceased him. He is survived by his three brothers, Eugene, John and Daniel; his sister, Sr. Claire, SCIM; his many nieces, nephews, as well as by his Marist Brothers of the Province of the United States. Bro. Bill followed a tradition of Marist Brothers after his great uncle, Brother Eugene Francis and his uncle, Brother Chanel Lambert. He also had an uncle, Bishop Francis Lambert, who a Marist missionary priest in the South Pacific. A wake for Bro. Bill will be held from 5-7pm Tuesday, May 29, 2018 at St. Theresa’s Church, 22 Plymouth St., in Methuen, MA followed by his funeral mass at 7pm. Burial will be on Wednesday, May 30, 2018 at the Marist Brothers Cemetery, 1455 Broadway in Esopus, NY at 12 noon. In lieu of flowers, donations can be made in his name to Central Catholic High School, 300 Hampshire St. Lawrence, MA, 01841 or Lazarus House, 412 Hampshire St. Lawrence, MA, 01841. Funeral arrangements are under the direction of the John Breen Memorial Funeral Home Inc. 122 Amesbury St. Lawrence, MA, 01841. For more information or to send an online condolence please visit our website at: www.breenfuneralhome.com.

Brother William Chanel Lambert, FMS, a member of the Marist Brothers of the Schools for 61 years, ended his earthly journey to his Heavenly reward on May 26, 2018 in Mary Immaculate Nursing Home in Lawrence, MA. He was 79 years old. Brother... View Obituary & Service Information

The family of Brother William Chanel Lambert created this Life Tributes page to make it easy to share your memories.

Send flowers to the Lambert family.