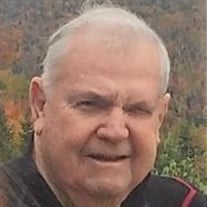 William J. Honohan of Salem NH passed away at the home of his daughter and son in law Peggy and Dan Kowal, surrounded by his family on Dec 15,2020. He has joined his beloved wife of 64 years, Dorothy (Melvin), in Heaven. He was the son of Norah (Driscoll) and William Honohan. He is survived by 7 children: Maureen Tortolano and her husband Lance; Judy Honohan; Susan Phelan and her husband Greg, Eileen Honohan; Peggy Kowal and her husband Dan; William J. Honohan Jr.; and Timmy Honohan and his wife Kim. Pa is also survived by his remarkable grandchildren, Lance and Gabrielarose Tortolano, Nicholas and wife Amy Phelan, Macenzie Phelan and husband Cam Palzynski, and Casey Kowal. He was brother to the now deceased Francis Honohan, Eileen French, Rita Beaulieu, Shirley Johnson, Betty Honohan and Robert Honohan He regretfully leaves many wonderful nieces and nephews who loved him dearly. He is also survived by his brother-in-law William Melvin. With great sadness, he leaves his dear cousins Michael and Peggy Holland, Jerome and Betty Holland and longtime friend Mrs. Ella Reilly. In addition, Pa leaves behind many grand dogs; Jagger, Mia, Olive, Chloe, Toby, Logan, Pemi and the newest addition, Louis. Bill worked for ATT/Nynex for the duration of his career, where he made many lifelong friends. In his youth he enjoyed training carrier and homing pigeons, much to his mother’s dismay. He was an Army veteran of the Korean War, where he achieved the rank of Sergeant and was nominated for a Purple Heart after being hit by enemy fire before being honorably discharged. Bill was an avid football and hockey fan with a special fondness for the teams of Boston College and Notre Dame, the NE Patriots and Boston Bruins. He was a member of the Ancient Order of Hibernians as well as the Elks Club. The family is comforted by the fact that his good friends John Beirne (Beirnesy), John Foley (Chick), Charlie Reilly and Jack Lawlor were all waiting for him at the Pearly Gates so he could rejoin the 45’s game and take all of their money. The family would like to thank the staff at Compassus Hospice, especially his nurse Gail. They would also like to thank his caretaker Sheri from the VA. Their professionalism, compassion and care are deeply appreciated. His wake will be held at John Breen Memorial Funeral Home, 122 Amesbury Street, Lawrence MA on Monday December 21st from 4pm -8pm. The funeral mass will be held on Tuesday at 11: 00am at Our Lady of Good Counsel, Saint Theresa’s Church in Methuen, MA. His burial will follow in the Immaculate Conception Cemetery in Lawrence, MA. For online condolences and other information please visit us at www.breenfuneralhome.com.

William J. Honohan of Salem NH passed away at the home of his daughter and son in law Peggy and Dan Kowal, surrounded by his family on Dec 15,2020. He has joined his beloved wife of 64 years, Dorothy (Melvin), in Heaven. He was the son of Norah... View Obituary & Service Information

The family of William J. Honohan created this Life Tributes page to make it easy to share your memories.

William J. Honohan of Salem NH passed away at the home of his...

Send flowers to the Honohan family.