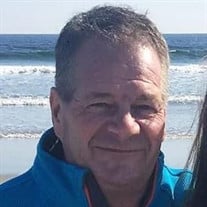 William J. "Billy" Cullen, 54, of Salem, NH passed away on May, 17, 2020 at the Community Hospice House in Merrimack, NH succumbing too quickly to melanoma cancer. Born in North Adams, MA, he was the son of William and Rosemary Cullen. He was raised and educated in Salem, NH, graduating from Salem High School in 1984. He worked in landscaping and property management having owned Cullen Property Management for many years. Over the past 6 years, he was employed by Louis P. Cote Inc. in Goffstown and was a valued member of the rigging crew. Billy was a loveable, fun-loving guy and a good friend to many. He loved to fish and loved being out on the water whether it was a pond, lake, river or ocean. In the nice weather, he would take overnight rides on his motorcycle to the mountains in NH. In addition to riding to the mountains, he enjoyed taking a week during the summer to go ATVing in Maine with his friends. He was quite the cook and would always experiment with new recipes. Since he was a young boy, he was a fan of the Dallas Cowboys and loved to have friendly wagers with family members that the Cowboys would win the Thanksgiving Day game. He will be sadly missed and lovingly remembered by his two daughters, Shannon and Kaitlyn Cullen of Sandown, NH; his parents, Bill and Rosemary Cullen of Salem, NH; his sisters, Kathy Loffredo and her husband Mike of Salem, NH, Patty Cullen and her fiancé Bob Higgins of Franklin, MA, and Susan Genest and her husband Paul of Atkinson, NH; his nephews, Michael and Matthew Loffredo, Patrick and Sean Mahoney, and Mark Genest; his niece Lauren Genest; as well as several uncles, aunts and cousins. ARRANGEMENTS: Due to the current pandemic, all services will be private. Arrangements are by the John Breen Memorial Funeral Home, Lawrence, MA. A celebration of his life will be announced at a later date where we would like to have his many friends and family gather and remember Billy. In lieu of flowers, donations can be made in Billy’s name to Community Hospice House, 210 Naticook Rd., Merrimack, NH 03054.

William J. "Billy" Cullen, 54, of Salem, NH passed away on May, 17, 2020 at the Community Hospice House in Merrimack, NH succumbing too quickly to melanoma cancer. Born in North Adams, MA, he was the son of William and Rosemary Cullen. He was... View Obituary & Service Information

The family of William J. "Billy" Cullen created this Life Tributes page to make it easy to share your memories.

Send flowers to the Cullen family.