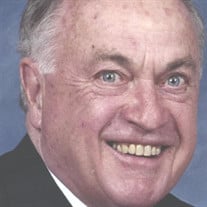 William G. “Bill” Carney, 88, of Lawrence, Massachusetts formerly of Londonderry, New Hampshire, passed away on Thursday, November 21, 2019 at the M. I. Restorative Nursing Center in Lawrence, Massachusetts. He was born in Lawrence on December 28th, 1930, son of the late Eugene and Anne (Sipsey) Carney. Bill was educated in the local schools of Lawrence, he was a 1948 Central Catholic Graduate and a 1952 Merrimack College Graduate. He served during the Korean Conflict for the United States Navy aboard USS LST 533. Bill worked as a Production Analyst for Western Electric/Lucent Technologies in North Andover, Massachusetts. He was a member of the Knights of Columbus of Salem, NH. Bill coached and was the Vice President of the Little League in Salem, NH and was the President of the Saint Joseph’s Grammar School Board in Salem, NH, and was on the Budget Committee also in Salem, NH. Bill was an avid Tennis Player, Mountain Climber, loved Skiing, Roller Blading, Jogging, Kayaking in Cobbett’s Pond, playing Hockey, and mostly was proud of his Irish Heritage. His dad was born in UmmeryroeGeevagh Co. Sligo. Bill and his wife traveled to Ireland. Bill returned years later with his older son and found the family home. Bill enjoyed spending time with his family, going to this children and grandchildren's sporting and music events. He loved animals and always owned a dog. Husband of his beloved wife of 67 years Teresa M. (Chateauneuf) Carney His sons: William T. Carney and his wife Deborah of Darien, CT and Kevin M. Carney and his wife Cheryl of Derry, NH His 4 grandsons: Thomas and Lisa Carney of Rockville, MD., Stephen and Ashton Carney of Ridgefield, CT, Matthew Carney of Derry, NH and Christopher Carney and Maggie Farina of Londonderry, NH. Bill had two boys as did both his sons. His 2 Great Granddaughters: Nora Joan Carney of Derry, NH and Claire Josephine Carney of Rockville, MD. Who were his joys in life. Bill was predeceased by his brother Eugene Carney a WWII Navy Veteran, and his sister-in-law Joan Hayes. Bill's family would like to thank the staff of the MI Restorative Nursing Center for the kind and loving care they provided for Bill. Relatives and friends may call on Tuesday, December 3, 2019 from 10:00 a.m. to 12:00 p.m. at the John Breen Memorial Funeral Home, Inc., 122 Amesbury Street, Lawrence, MA. His service will take place following the calling hours at 12:00 noon in the funeral home. Burial will be private. For online condolences and other information please visit us at www.breenfuneralhome.com. Memorial Contributions may be made to St. Judes Children’s Hospital, 501 St. Jude Place Memphis, TN 38105 USA / [email protected]

The family of William G. "Bill" Carney created this Life Tributes page to make it easy to share your memories.

Send flowers to the Carney family.