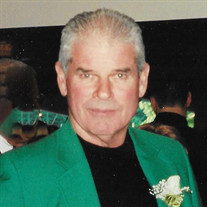 William F. (Billy) Bateman , 77, of Haverhill, MA, passed away suddenly on Tuesday, June 15, 2021 . Billy was a true gentleman, born in Lawrence on March 5, 1944, to the late William and Catherine (Fitzgerald) Bateman. He graduated from St. Laurence O’Toole Grammar School and Central Catholic High School where he was inducted into its Athletic Hall of Fame. He later attended Hillsdale College in Michigan and graduated in 1966. He fulfilled his military service to his country in the National Guard. Bill was a devout Catholic, a man of deep faith, and a former parishioner of St. Patrick Church in Lawrence and most currently, Sacred Hearts Church in Bradford, MA. Bill taught school for 35 years at the A.B. Bruce School in Lawrence, MA. He was a member of the Lawrence Teachers’ Retirement Board, a member of the Merrimack Valley Golf League where he also worked part time. He was associated with Andover Country Club and tended bar for many years in Lawrence. He was a very humble man who valued his family above all else. He was compassionate, kind and generous, and Bill always found good in everyone he met. He was a faithful friend who could be counted on to lend a helping hand at any given time. Bill will be deeply missed by all who knew him, especially the love of his life and wife of 53 years, Barbie (Miskell) Bateman; his sons, Shaun and his husband Rob of Kingston, NH; and Kevin and his wife, Kelley of Haverhill. “Bampy” will be dearly missed by his five grandchildren whom he adored: Ryan, Colin, Noah, Gabriella (Gabby), and Jackson Bateman. He is also survived by his sister, Marguerite Dalton and her husband, Bill, of North Falmouth, MA. as well as several nieces, nephews and extended family members. He was predeceased by his sister Eileen Sarre. Relatives and friends are invited to attend calling hours at the John Breen Memorial Funeral Home in Lawrence, MA. on Wednesday, June 23 between the hours of 4pm and 8pm. His funeral Mass will be celebrated on Thursday, June 24, 2021, at 11 AM at Sacred Hearts Church in Bradford. Burial will follow at the Holy Sepulchre Cemetery in North Andover, MA. For online condolences and other information, please visit www.breenfuneral home.com. In lieu of flowers, donations can be made to The American Heart Association or to a charity of one’s choice.

William F. (Billy) Bateman , 77, of Haverhill, MA, passed away suddenly on Tuesday, June 15, 2021 . Billy was a true gentleman, born in Lawrence on March 5, 1944, to the late William and Catherine (Fitzgerald) Bateman. He graduated from St.... View Obituary & Service Information

The family of William F. (Billy) Bateman created this Life Tributes page to make it easy to share your memories.

Send flowers to the Bateman family.