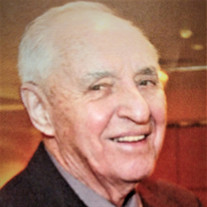 William F. Baggett, 95, lovingly known as "Papa Baggett" by many, passed away peacefully on Saturday November 10, 2018 at Salem Haven Nursing Home in Salem, NH. William was born and raised in Lawrence, MA, the son of Lawrence Fire Chief Joseph Baggett and Matilda (Leblanc) Baggett. Upon graduating from Lawrence High School, he enlisted in the United States Marine Corp in 1941, working his way up the ranks to Technical Sergeant. During his enlistment, he flew non-combat fighter planes, and would often speak of landing on aircraft carriers and practicing high-wind landing maneuvers without crashing. He was also a Weapons and Munitions Instructor, teaching upwards of 600 soldiers at a time while standing on lunchroom tables in the mess hall. Upon his Honorable Discharge, Bill returned home to Lawrence to help his father and younger siblings after their mother passed away in 1943. Shortly after returning home, he met his wife, Elizabeth "Betty" McLaughlin while working construction with his friend Jack Hammond in Rye, NH. As he told the story, he and Jack walked in for lunch at Carberry's on Route 1 in Rye, while Betty was working behind the counter, and he knew immediately that he loved her. They married on January 6, 1951 and went on to have nine children. Papa was well known for his fierce dedication to his family, his stubbornly strong work ethic, and his great sense of humor, instilling all these qualities into each of his children. Papa worked for the General Baking Company (1946-1957) before going to work as a liquor salesman for the Merrimack Valley Distributing Company (1957-1975) and United Liquors (1975-1980), before retiring early to care for his ailing wife Betty, who passed away in December 1988. Papa was pre-deceased by his parents Joseph and Matilda, his siblings Rita, Jimmy, Peggy and Frank, his wife Betty (1988), daughter Kathy-Sue (1962) and son Billy Jr. (1990). Papa is survived and will forever be missed by his children: Joe of Salem, NH, Pat and his wife Ellen (Foley) of Atkinson, NH, Mike of Lawrence, MA, Mary-Ellen and her husband Larry Dunn of Salem, NH, Lawrence Firefighter, Tom and his girlfriend Lisa Donovan of South Lawrence, MA, Sheila and her husband Rick Fortin of South Lawrence, MA and Lisa of Dracut, MA. Additionally, he is survived by his 11 grandchildren: Jen, Jill, Joe Jr, Kim, Billy III, Tim, John, Kayla, Brad, Greg, and Trevor; and his many great-grandchildren, nieces and nephews, each of whom held a very special place in his heart. The Baggett family would like to extend a warm and very heartfelt thank you to the wonderful staff at Salem Haven who cared for Papa with love and compassion over the past year. Their support for our family, especially during Papa’s last days, was deeply appreciated and will always be remembered. Family and friends are respectfully invited to Papa's services at the John Breen Memorial Funeral Home 122 Amesbury St Lawrence, MA. Calling hours will be held Wednesday November 14, 2018 from 4-7 PM. His funeral mass will be held Thursday November 15, 2018 at 10 AM at Our Lady of Good Counsel, St Augustine's Chapel 128 Ames St Lawrence, MA. Papa will be laid to rest with Military Honors in the Immaculate Conception Cemetery in Lawrence, MA immediately following his mass. For more information or to send an online condolence please visit our website at www.breenfuneralhome.com. In lieu of flowers, donations may be made to St Jude Children’s Research Hospital or to a charity of one's choice.

The family of William F. Baggett Sr. created this Life Tributes page to make it easy to share your memories.

William F. Baggett, 95, lovingly known as &quot;Papa Baggett&quot; by many,...

Send flowers to the Baggett family.