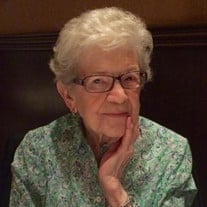 Wanda Connolly, a lifelong resident of Lawrence, passed away on October 17, 2021, after a short illness. Born in 1921, Wanda lived for 100 years to grace us with her love, her wisdom, her fierce devotion to her family, and her love of laughter. She could never accept a kindness from another person without repaying it tenfold. She was one of a kind and will be remembered by all with affection. Wanda grew up in the city and attended Lawrence schools, graduating from Lawrence High School. She was one of seven children of Polish immigrants and, growing up during the Great Depression, she learned the value of hard work early on in her life. Like so many residents of the Merrimack Valley, Wanda worked for Western Electric in North Andover, MA. She worked there for 25 years, before retiring in 1984. At the age of 20, she married Francis Connolly of Andover, MA and then lived in South Lawrence, where she was a member of St. Patrick’s Parish until her passing. During her younger years, Wanda enjoyed going to the beach during the summer and always enjoyed a good lobster roll from Brown’s or Markey’s. She was a member of a candlepin bowling league for many years, earning high scoring honors on several occasions. Wanda was very active in the Polish American Veterans Ladies’ Auxiliary at the Julian Stopyra Post in Lawrence, holding office in the organization for many years, including serving as Vice President and Treasurer. She also held office in statewide Polish American Veterans organization as the Sergeant at Arms. Always interested in crafts, Wanda enrolled in ceramics classes, made Christmas decorations, and loved to crochet. After retirement, she spent a lot of time with her grandchildren. An avid Boston sports fan, Wanda never missed watching a Patriots, Red Sox, Celtics, or Bruins game her entire life. She was also a member of the Merrimack Valley YMCA, where she enjoyed taking swim classes to stay fit. Among her many activities, perhaps those that brought her the most happiness were her trips to Foxwoods with friends and relatives, her attendance at bingo games at Mary Immaculate Residential, her love of scratch tickets, and above all - watching sports and playing 45’s with her daughter and granddaughter on Sunday afternoons. Wanda is survived by her loving and devoted daughter, Clare (Connolly) Macoul of Windham, NH, and her loving grandchildren, Christine Macoul of Boston, MA, Stephanie Macoul of New York City, NY, and Matthew Macoul. She is also survived by her niece Mary Holozubiec of Whitehorse, Yukon, Canada, nephews Stephen Piasecki of Stoneham, MA, Francis Holozubiec of New York City, NY, and Thomas Rys of Methuen, MA, as well as several grand nieces and nephews. Wanda was predeceased by her husband, Francis Connolly, her son, Francis Connolly Jr., her parents Stefan Holozubiec and Emelia (Recko) Holozubiec, both originally from Poland. She is also predeceased by her sisters and their spouses Helen (Holozubiec) Rys and Edward Rys of Lawrence, Laura Holozubiec of Lawrence, and Florence (Holozubiec) Piasecki and John Piasecki of Worcester, MA; her brothers and their spouses Edmund Holozubiec and Ruth (Powell) Holozubiec of Salem, NH, Joseph Holozubiec and Jennie (Bajak) Holozubiec of Andover, and Henry Holozubiec and Ann (Bujalski) Holozubiec of Lawrence. Friends and relatives are cordially invited to calling hours on Friday, October 22nd, 4:00-6:00 PM at the John Breen Memorial Funeral Home at 122 Amesbury Street in Lawrence, MA, followed by a funeral Mass to be held Saturday, October 23rd at 11:00 AM at St. Patrick’s Church, 188 South Broadway Lawrence, MA.

Wanda Connolly, a lifelong resident of Lawrence, passed away on October 17, 2021, after a short illness. Born in 1921, Wanda lived for 100 years to grace us with her love, her wisdom, her fierce devotion to her family, and her love of laughter.... View Obituary & Service Information

The family of Wanda Connolly created this Life Tributes page to make it easy to share your memories.

Wanda Connolly, a lifelong resident of Lawrence, passed away...

Send flowers to the Connolly family.