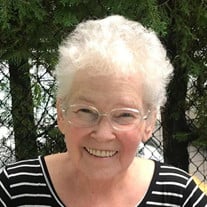 Virginia Anne Fiander, 78, of North Andover, Massachusetts, passed October 14, 2019.  Virginia was born to Eben and Vera Ellis, February 15, 1941, in Boston, Massachusetts. She graduated from Watertown High School in 1958 and received her RN Degree from New England Deaconess Hospital. She married Donald Fiander in 1961, and they lived together in Watertown and Burlington, Massachusetts. Together they raised 4 children as well as many foster children. She is survived by four children: Deborah Monte and her husband Jack, Rebecca Cote and her husband Rob, Donald Fiander Jr. and his wife Andrea, Kathryn Tomaino and her husband Arnie. She also leaves her brother, David Ellis and his wife Marcia. Virginia was grandmother to 7 grandchildren: Jessica Monte, Elsie Audibert, Samuel Cote, Marissa Cote, Lilly Audibert, Liana Cote and Hannah Audibert. She was also a great grandmother of 2: Kaylee Croft and Mathew Audibert. She was preceded in death by her husband, Donald Fiander, and her brother, Charles Ellis. Virginia was a Registered Nurse at Deaconess Hospital, Mt. Auburn Hospital, and Middlesex County Hospital for many years and was passionate about affecting the most positive change in people. Over the years, she devoted herself to helping several new churches get started, in addition to leading home bible studies, teaching adult Sunday school classes, and speaking at various woman’s retreats and events. Visiting hours are scheduled for October 22, 4 to 8 pm at John Breene Memorial Funeral Home, 35 Merrimack St., N. Andover, MA 01845 and the celebration of her life is scheduled for October 23, 10:30 a.m. at Free Christian Church, 72 Elm St., Andover 01845. After the service, a processional will lead to Ridgewood Cemetery, 177 Salem St., North Andover, MA 01845 for the committal, followed by a reception at the Free Christian Church. Pastor Jon Paul will officiate the memorial service and Pastor Loralie Crabtree will give the homily. The family would also like to thank all the doctors, nurses and CNA's at Pilgrim Rehab, in Peabody as well as the Hospice caregivers from Compassionate Care for the excellent care they gave Virginia during her stay with them. Donations can be made to the MGH Division of Rheumatology, c/o Development office, 125 Nashua St., Suite 540, Boston, MA 02114. In the memo line please note: “in memory of Virginia Fiander”

The family of Virginia Anne Fiander created this Life Tributes page to make it easy to share your memories.

Send flowers to the Fiander family.