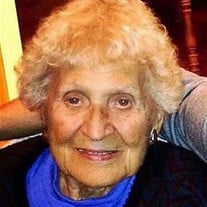 "Love for life on her own terms", Virginia "Jean" R. (Miller) Buckley, 98, a lifelong resident of Lawrence passed away peacefully on Tuesday, September 19th, 2017 at the Lawrence General Hospital surrounded by her loving family. She was affectionately know to all who knew her as "Nana B:" She was born in Lawrence on June 14, 1919 and was the daughter the late Lizas and Albina (Nanartoniute) Milus. Jean was educated in the Lawrence schools and was a graduate of Lawrence High School. She was an attendant of Saint Patrick's Church and was a member of the Saint Patrick's Ladies Sodality in Lawrence, MA., she was a woman of great faith. She worked for Arlington Bank and for Bolton Emerson Company as a bookkeeper for many years. First and most importantly her family and her grandchildren were her whole life. According to her family and everyone that knew her, Jean touched peoples hearts and souls of everyone she met. She enjoyed all the Holidays, was an avid reader, she loved watching movies with her grandsons, Markey's was her favorite Restaurant, she loved traveling to Key West, San Diego, Disney and her greatest joy was traveling to Ireland. Jean enjoyed spending time with family and extended family at Hampton Beach. She was also quite an animal lover. wife of the late Cornelius J. Buckley who passed away in 1990, as a couple they were the air that each other breathed, and very devoted to each other. Her family members include her daughter Eileen (Buckley) and her husband Kevin J. Winters of Methuen, MA. Devoted grandchildren: Ryan Buckley Winters and his partner John Mark Hamilton of San Diego, CA. and Kevin Neil Winters of Methuen, MA. As well as several beloved nieces and nephews and many extended family locally and in Key West and San Diego. Jean was predeceased by her loving daughter Patricia Ann Buckley, her devoted grandson Patrick Shawn Winters, her brothers Peter and Edward Miller, her two sisters Ann Roberts and her husband Harold and Natalie Marlin and her husband Joseph. Jean's family were very grateful to her caretakers, she considered them her dear friends. They also want to extend special thanks to the Lawrence General Hospital for the care and compassion they gave during her stay. Relatives and friends may call on Friday, September 22, 2017 from 9:00 a.m. to 10:30 a.m. at the John Breen Memorial Funeral Home, Inc., 122 Amesbury Street, Lawrence, Ma. Her funeral mass will be celebrated on Friday, September 22, 2017at 11:00 a.m. in Saint Lucy's Church in Methuen and her burial will follow in the Immaculate Conception Cemetery in Lawrence, MA. For online condolences and other information please visit us at www.breenfuneralhome.com. Memorial contributions may be made to a Charity of One's Choice.

"Love for life on her own terms", Virginia "Jean" R. (Miller) Buckley, 98, a lifelong resident of Lawrence passed away peacefully on Tuesday, September 19th, 2017 at the Lawrence General Hospital surrounded by her loving family. She was affectionately... View Obituary & Service Information

The family of Virginia "Jean" R. (Miller) Buckley created this Life Tributes page to make it easy to share your memories.

Send flowers to the Buckley family.