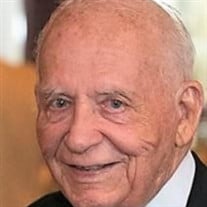 Ralph, Thomas E, age 94, of The Villages, FL, passed away on May 29, 2020. Tom was born in Methuen, MA. He graduated from Central Catholic High School after which he served in the U. S. Navy. He graduated from Boston College in 1948 with a degree in business. He accepted a position in the automotive industry in Michigan. He returned to Massachusetts to marry the love of his life Helen, and they returned to Michigan to start their life together. During his 36 year career at Ford Motor Company he was sent overseas to work in Argentina for seven years. After retiring he moved to Tennessee for 20 years and then to Florida for 6 years. Tom was a devoted husband and family man, proud of his children and grandchildren. He was an avid sportsman, and enjoyed golf and bowling as some of his favorite activities. After moving to Florida he took up shuffleboard where he twice won a gold medal in the Senior Games. Tom is survived by his son Robert and wife Barbara of South Carolina, their children Thomas and Andrew, great grandchild Jaxon, daughter Deborah Sadowski and husband Michael of The Villages Florida, their children Christina Rosello and husband Andres, Timothy and wife Lisa , son William and wife Mary of Ohio, their children Emily, Anna and Michael, daughter Donna Craig and husband George of Arizona; brother Raymond Ralph of Salisbury, Massachusetts, sister Eleanor Blais of Salem, New Hampshire, brother Allan Ralph of Salem, New Hampshire and several nieces and nephews. Tom was predeceased by his wife Helen of 59 years. The funeral and burial will take place in Massachusetts later this year when the family can safely gather together. For online condolences and future plans, please visit www.breenfuneralhome.com. His funeral mass will be celebrated on Friday, August 14th, 2020 at 10:00 a.m. in Saint Mary's Church in Lawrence and burial to follow in the Immaculate Conception Cemetery in Lawrence, MA. Arrangements are under the direction of the John Breen Memorial Funeral Home, Inc., 122 Amesbury Street, Lawrence, Massachusetts 01841.

Ralph, Thomas E, age 94, of The Villages, FL, passed away on May 29, 2020. Tom was born in Methuen, MA. He graduated from Central Catholic High School after which he served in the U. S. Navy. He graduated from Boston College in 1948 with a... View Obituary & Service Information

The family of Thomas E. Ralph created this Life Tributes page to make it easy to share your memories.

Send flowers to the Ralph family.