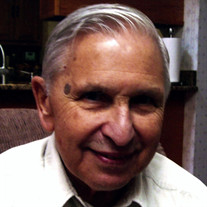 Thomas J. Hajj, 92 , of Lawrence, Massachusetts passed away on Wednesday, February 28, 2018, at the Lawrence General Hospital. He was born on February 27, 1926 in Lawrence, Massachusetts to the late John and Mary (Kanan) Hajj. Thomas was educated in the Lawrence Public Schools and was a graduate of Lawrence High School. He served in the United States Navy during WWII and was a parishioner of Saint Anthony's Parish in Lawrence, MA. Thomas worked as an Operator of Heavy Equipment for L. C. Cyr Company in Lawrence and for Manny Hajj Construction Company in Lawrence, until his retirement. He was a member of the Local #4 Operating Engineers and a member of American Lebanese Awareness Association. According to his family he was a Huge Fan of the Boston Red Sox and the New York Giants!!! He also enjoyed volunteering for the Mary Immaculate Restorative Nursing Center in Lawrence, MA. Thomas especially enjoyed attending his grandchildren's events and spending time with them. Husband of the late: Dorothy (Duff) Hajj who passed in 2008 His family members include his children Judith Romano and her husband Paul of Haverhill, MA., Thomas M. Hajj and his wife Valerie of Methuen, MA., David J. Hajj and Eileen Boyle of Salisbury, MA. His grandchildren Robert Carney and Beatrice Reaud of Washington, DC, Monica Carney of Haverhill, MA, Attorney Thomas S. Hajj of Lowell, MA., Jeffrey and Shannon Hajj of North Andover, MA. and Samuel and Alyssa Hajj of Bradford, MA. 3 Great Grandchildren Alfred, Thomas, and James His siblings: James Hajj, Emily Grasso, and Effie Saba As well as many nieces, nephews and cousins. He was predeceased by his brothers and his sisters Manny Hajj, Charles Hajj, George Hajj, Adele Hatem, Helen Hajj and Genevieve Rahilly. Relatives and friends are invited to call on Sunday, March 4th, 2018 from 3:00 to 7:00 p.m. at the John Breen Memorial Funeral Home, Inc., 122 Amesbury Street, Lawrence, MA. His funeral mass will be celebrated on Monday, March 5th, 2018 at 9:30 a.m. in Saint Anthony's Church in Lawrence, MA. Burial will follow in the Spring Grove Cemetery in Andover, MA. Memorial Contributions may be made to Saint Anthony's Church, 145 Amesbury Street, Lawrence, MA 01841 or to Mary Immaculate Restorative Center, 172 Lawrence St, Lawrence, MA 01841.

The family of Thomas J. Hajj created this Life Tributes page to make it easy to share your memories.

Thomas J. Hajj, 92 , of Lawrence, Massachusetts passed away on...

Send flowers to the Hajj family.