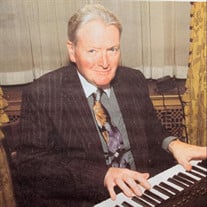 THOMAS J. GARVEY Irish Historian and beloved member of the Irish Community of Andover, Lawrence and Boston, Thomas J. Garvey passed away at Bear Mountain @ Andover on September 3, 2020. He was born in Andover on November 14, 1929, the son of Patrick J. Garvey and Mary M. (Lynch) who immigrated to the U.S. from Counties Cavan & Leitrim, Ireland. He was educated at St. Augustine Grammar School in Andover and graduated from Central Catholic High School in 1948. Tom was an accomplished, “self taught” musician on piano, organ and button accordion. He played in many bands in circa 1950’s in the Boston area including the Tara Ceili Band and also had his own band in the 1960’s. He entertained as a pianist at many house parties and functions over the years and also was a fill in organist at many local Catholic Churches. Tom was a radio host for 31 years on WCCM’s traditional “Irish Music Tribute” that aired annually on St. Patrick’s Day. He was the accompanist piano player for St. Michael’s Minstrel Show for many years and a contributor to Boston College’s Irish Music Archives. He was a communicant of St. Augustine’s Church in Andover and a very devout Catholic. Tom had a marvelous sense of humor, an amazing memory and was quite the storyteller. An Army Veteran of the Korean War Tom served as a medic in the Mash Unit. He was honored with a Combat Medical Badge and Bronze Star. He was promoted to Sergeant First Class E-6 while in Korea. Tom retired from Wang Laboratories in Lowell. His survivors include nephews, Christopher Garvey and wife Diana & their sons of South Carolina & Kevin Garvey of Texas. Special cousins Peggy (Moran) & her husband Jack Fitzgerald, Patsy Garvey, Richard Garvey & wife Maryann, Carmel O’Sullivan (Dublin), Phyllis Doughty (London) & other cherished relatives & friends in the U.S., Ireland, England & Australia. In addition to his parents, he was pre-deceased by his brother John Garvey & sister-in-law, Mary Garvey & their daughter Mary Ellen & several cousins. Calling hours will be held on Tuesday, September 8 from 3:00-7:00pm at the John Breen Memorial Funeral Home, Inc., 35 Merrimack Street, No. Andover. A funeral mass will be celebrated on Wednesday, September 9 @10:30a.m at St. Augustine’s Church, 43 Essex Street, Andover, MA. Burial with military honors will follow at the Spring Grove Cemetery in Andover, Mass., in the Veterans’ Section of the cemetery. For online condolences and other information please visit us at www.breenfuneralhome.com.

THOMAS J. GARVEY Irish Historian and beloved member of the Irish Community of Andover, Lawrence and Boston, Thomas J. Garvey passed away at Bear Mountain @ Andover on September 3, 2020. He was born in Andover on November 14, 1929, the son... View Obituary & Service Information

The family of Thomas J. Garvey created this Life Tributes page to make it easy to share your memories.

Irish Historian and beloved member of the Irish...

Send flowers to the Garvey family.