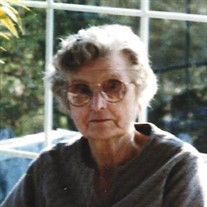 Teresa (Trzebowski) Zawadzki, 93, of Methuen, Massachusetts passed away on Friday, September 15, 2017 at the Merrimack Valley Hospice House in Haverhill, MA. She was born on June 1, 1924 in Jarocinie, Jarocin, Poland, daughter of the late Piotr Trzebowski and Rozalia Koterba Trzebowski. Teresa was always a positive and energetic person. Her younger years were filled with turmoil but she still tried to maintain a positive attitude. At the age of 14 she was captured by the Germans at the beginning of World War II and taken to a concentration/labor camp. She was held there until the war ended. At that time she chose to come to the United States through Canada by working as an indentured servant for one year. She enjoyed a free and prosperous life after that with her husband, whom she met in the prison camp, and with her son. She worked for a long period of time at the Essems Hot Dog Company and was a life Member of Holy Trinity Church in Lawrence as well as attending Corpus Christi, Holy Rosary Church from time to time. Her final years were extremely happy as she watched her grandsons develop into young men. At that point she became entertained with her four great-grandsons and a great-granddaughter. She also enjoyed gardening, doing all kinds of puzzles and taking care of her dog. She was an inspiration to all who knew her. Wife of the late John Zawadzki Her family members include her son Henry and his wife Sherry Zawadzki of Methuen, MA. Her grandsons Michael and his wife Michele Zawadzki and Jason and his wife Cherie Zawadzki both of Dracut, MA. Her great-grandchildren Michael Zawadzki Jr., Jacob Zawadzki, Connor Zawadzki all of Dracut, MA. and Cole and Mia Zawadzki of Lawrence, MA. Relatives and friends are invited to call on Monday, September 18, 2017 from 4:00 to 6:00 p.m. at the John Breen Memorial Funeral Home, Inc., 122 Amesbury Street, Lawrence, MA. Her funeral mass will be celebrated on Tuesday, September 19, 2017 at 10:00 a.m. in Corpus Christi Parish, Holy Rosary Church in Lawrence, MA. Entombment will follow in the Immaculate Conception Mausoleum in Lawrence, MA. For online condolences and other information please visit us at www.breenfuneralhome.com. Memorial contributions may be made to the Merrimack Valley Hospice House at 360 North Ave., Haverhill, MA. 01830

Teresa (Trzebowski) Zawadzki, 93, of Methuen, Massachusetts passed away on Friday, September 15, 2017 at the Merrimack Valley Hospice House in Haverhill, MA. She was born on June 1, 1924 in Jarocinie, Jarocin, Poland, daughter of the late Piotr... View Obituary & Service Information

The family of Teresa (Trzebowski) Zawadzki created this Life Tributes page to make it easy to share your memories.

Send flowers to the Zawadzki family.