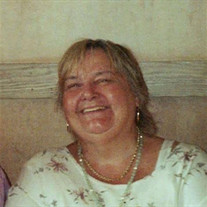 Susan Ann (Hearty) Kierstead, 80, of Haverhill (formerly of North Andover and Worcester) passed away peacefully with her devoted family at her side in Massachusetts General Hospital in Boston after a long, courageous fight with cancer on October 14, 2017. Born in Lawrence, Mass in 1936, she was the daughter of the late Arthur L Hearty, born in Lawrence, and Florence (Parkinson) Hearty of Wappingers Falls, NY. She leaves her children, Kathleen (Kierstead) Lane and her husband Edward, Richard (Ricky) Bruce Kierstead, Jr. and Kristina R Kierstead and her partner Gerard Disario, all of Haverhill. She also leaves her grandchildren, Melissa Ann Kierstead of Hampton Falls, NH, Michael Thoma, Jr of Haverhill, Kaylee (Thoma) Esposito and her husband Jonathan of Londonderry, NH, Kacie Rivera and Gerard Disario Jr of Haverhill, as well as her three great-grandchildren, Cameron Gallant USMC, Amelia Esposito and Beck Rivera. She also leaves her two sisters, Marylou (Hearty) Salois of North Andover and Kathleen Hearty of Castro Valley, CA and a sister-in-law Joan (Kierstead) Walker of New Braintree, as well as several nieces and nephews. Susan was predeceased by her husband, Richard Bruce Kierstead, Sr., 59, in 1995, son Kenneth A Kierstead, 5 and sister Betty Hearty of California. Sue was a graduate of Johnson HS in 1954 and then UMass Amherst, majoring in Journalism. This led to her becoming the Women’s Pages Editor for the Worcester Telegram and Gazette for several years, a prestigious position at the time. It was here she met her husband Richard (Dick) Bruce Kierstead, who also worked at the T&G. Sue later taught at the North Andover High School and the LARE training facility in Lawrence. Susan retired from LARE in 2005. Sue was a devoted and loving Wife, Mother, Sister, Grandmother, Great-grandmother and friend. Sue was called Meme by many friends and family and was cherished for her intelligence, wit and affection, always putting the needs of those she loved before her own. To know Susan was to respect and love her. Calling hours will be held on Thursday, October 19th, 2017 from 4:00 pm to 8:00 pm at the John Breen Memorial Funeral Home, Inc., 35 Merrimack Street, North Andover, MA. Her Funeral Mass will be celebrated on Friday, October 20th, 2017 at 11:30 a.m. in Saint Michael’s Church, 196 Main Street, North Andover, MA. Burial with her son and husband at the Holy Sepulchre Cemetery also in North Andover. All who loved Susan are invited to pay their respects and share memories with the family at these services. For online condolences and other information please visit us at www.breenfuneralhome.com.

Susan Ann (Hearty) Kierstead, 80, of Haverhill (formerly of North Andover and Worcester) passed away peacefully with her devoted family at her side in Massachusetts General Hospital in Boston after a long, courageous fight with cancer on October... View Obituary & Service Information

The family of Susan Ann (Hearty) Kierstead created this Life Tributes page to make it easy to share your memories.