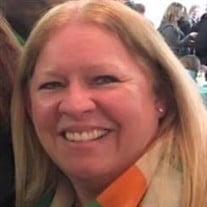 Windham NH – Sheila A. (Wilson) Hudson, 58, passed away peacefully surrounded by loving family on Friday June 4, 2021. Sheila was born in Methuen, the second oldest child of the late John (Jack) Wilson and the late Mary (McGovern) Wilson. Sheila grew up in the Tower Hill section of Lawrence and was a graduate of St. Augustine’s Grammar School and Lawrence High School Class of 1981. Sheila followed her father into the field of teaching and while in college became a substitute teacher in 1981. Upon graduation from Fitchburg State College Sheila began her 35 year career as a special education teacher in the Lawrence Public Schools system. Sheila taught at the Leonard, Storrow, Bruce, General Donovan, Guilmette, Lawlor, Leahy, and Parthum Schools. She brought her patience, love and passion for teaching to the children who needed it the most. The children were truly blessed to have Sheila as their teacher. It is also where she forged so many treasured friendships that have lasted through the years. Sheila loved to be with her family and friends. Summers at Salisbury and Seabrook beaches with spirited 45s and Texas Hold’em card games. Traveling with her friends, the “Biddies”. St Patrick’s Day at the Claddagh and the Irish Cottage. Sheila also loved her concerts with a special place in her heart for Bon Jovi. If there was a good time to be had, Sheila was not missing out. She was the life of the party. Sheila was a devoted wife to her husband Phil, who she adored, and loving mother to her children. Family was everything to Sheila. Sheila and Phil enjoyed many vacations to beautiful destinations together. North Conway held a very special place in their hearts. In addition to her husband Phil, Sheila is survived by her daughter Tara of Windham NH and her partner Chris Adams, and son Parker of Salem NH. Sheila is also survived by her siblings; bother Jack and his wife Shari of Andover, brother Bob and his wife Karen of Amesbury, brother Jim of Boston and sister Maureen Leal and her husband Michael of Pelham NH. Sheila was also the loving and caring Aunt of Garrison, KaLeigh and Jillian Wilson; Ally and Grace Wilson; and Joseph and Mackenzie Leal. Sheila’s family would like to express their gratitude for all who supported Sheila as she fought this courageous battle with dignity and strength that was truly inspiring. She never once felt she was alone in this battle. A Funeral Mass will be celebrated on Thursday, June 10, 2021 at 11:00 A.M. in Our Lady of Good Counsel Parish at St. Augustine’s Chapel, 128 Ames St., Lawrence, MA. Burial will follow in St. Mary’s Cemetery also in Lawrence. Relatives and friends are invited to call on Wednesday, June 9, 2021 from 4:00 to 8:00 P.M. at the John Breen Memorial Funeral Home, Inc., 122 Amesbury St., Lawrence, MA.In lieu of flowers, donations in Sheila’s name can be made to the Mass General Hospital Warshaw Institute for Pancreatic Cancer Research, or MGH’s Cancer Center, 55 Fruit St., Boston, MA, 02114. To send an online condolence or for more information, please go to www.breenfuneralhome.com.

The family of Sheila A. Hudson created this Life Tributes page to make it easy to share your memories.

Send flowers to the Hudson family.