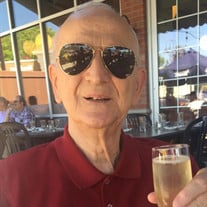 Salvatore (Sal) Joseph Ficara, 83, passed away on Thursday, April 1, 2021. He was born on December 9, 1937 in Manhattan, New York. His family moved to Queens, New York when he was ten years old and then Long Island, New York where he graduated and worked at Grumman Aircraft Engineering Corporation. Sal entered the Army in 1961 and headed to Korea, spending eighteen months in a combat zone. After serving in the Army, Sal studied photography under the apprenticeship of Arthur Darazien, one of the top ten photographers in the country. He traveled internationally throughout Europe and Asia. Arthur taught Sal all the tricks of the trade before starting his own company, Sal Ficara, Inc. Sal was married in 1968 to Gayle Marilyn Coffin and started a family. As his client base grew throughout New England, his company grew to be one of the largest commercial photography studios in the 1980s. Some of his noteworthy photographs during this time were of the Hawaiian Islands for airline advertisements, Sheraton hotels and Johnnie Walker advertisements, and catalogues for Pitney Bowes. When he landed Coca-Cola as a client he moved to Atlanta, Georgia and enjoyed the weather. Once retired, Sal returned to New England to spend his time with his family. Sal truly loved life and was a devoted father and grandfather. He enjoyed attending his grandchildren's events, Sunday dinners and holiday gatherings. He will be dearly missed. His family members include his daughter Mary Ficara Holway and son-in-law Bruce Holway of Concord, MA, daughter Lona Ficara Therrien and son-in-law, Craig Therrien of Boxford MA and his son, Paul Ficara of Mooresville, North Carolina and his four grandchildren, Jake Ficara, Grace Ficara, Chloe Therrien, and Max Therrien. Sal is also survived by his sister Tina Scatamacchia, and his brothers Anthony Ficara and Angelo Ficara, as well as his loving nephews and nieces. Relatives and friends are invited to call on Saturday, April 10th, 2021 from 3:00 p.m. to 4:00 p.m. at the John Breen Memorial Funeral Home, Inc., 35 Merrimack Street, North Andover, MA. His service will be held immediately following the wake at 4:00 p.m. in the Funeral Home. His memorial mass will take place on Sunday, April 11th, 2021 at 10:00 a.m. in St. Rose of Lima Parish, 12 Park Street, Topsfield, Massachusetts. Donations may be made in his name to EWTN at https://sd.ewtn.com/love-and-understanding-of-god/. Eternal Word Television Network, Inc. is a 501(c)3 nonprofit organization. Your donation is tax deductible in the United States. EWTN’s EIN is 63-0801391. To send flowers or a memorial gift to the family of Salvatore Joseph Ficara please visit our Sympathy Store.

Salvatore (Sal) Joseph Ficara, 83, passed away on Thursday, April 1, 2021. He was born on December 9, 1937 in Manhattan, New York. His family moved to Queens, New York when he was ten years old and then Long Island, New York where he graduated... View Obituary & Service Information

The family of Salvatore Joseph Ficara created this Life Tributes page to make it easy to share your memories.

Send flowers to the Ficara family.