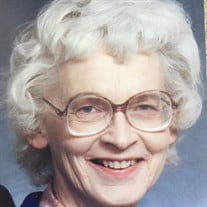 Ruth (Glennie) Petersen, 88, of North Andover, formerly of Medfield, passed away peacefully at the Meadows Health Center at Edgewood on July 15, 2018. Ruth was born August 31, 1929 in Lawrence (Mass.) to George W. and Hazel (Kent) Glennie. Raised in Andover, she received a B.S. in Commercial Art from Skidmore College and studied industrial design at Pratt Institute in Brooklyn, NY. In 1955, along with five other women, Ruth was hired by the legendary automotive designer Harley Earl to work at General Motors’ Styling Section in Detroit. Dubbed “The Damsels of Design”, the women were pioneers in the overwhelmingly male world of automotive design. Their story was featured a 2018 book by Constance Smith, Damsels in Design: Women Pioneers in the Automotive Industry, 1939-1959 (Schiffer Publishing). Ruth was responsible for numerous safety, lighting and styling features of General Motors cars, chiefly at Oldsmobile and Chevrolet. She designed a special Corvette for the 1958 Auto Show called the “Fancy Free”, which featured retractible seat belts, convenience and safety lighting integrated in the doors, a head up display (HUD) and other features that we take for granted in automobiles today. An enthusiastic traveler, Ruth arranged to work for a year in England at Vauxhall Motors before returning to the states to start a family. In 1962, she married E. Albert Petersen and settled in Medfield. She continued her design work at GTE Sylvania, where she did product, exhibition, and interior design. She was an active member of the United Church of Christ in Medfield, where she served as unofficial church photographer. She is survived by a daughter, Christine Petersen, MD, of Thompson, CT, and a son, Glenn Petersen, of New York City. She is also survived by sisters Helen G. Glinos of Chelmsford, Mass. and Marion G. Olsen of Groveland, Mass., and numerous nieces, nephews, cousins. She was predeceased by her husband. A memorial service will be held at the United Church of Christ, 496 Main St, Medfield, Massachusetts on August 1, 2018 at 11:00 a.m. Burial will be at the Ridgewood Cemetery in North Andover at a later date. In lieu of flowers, donations may be made to the Alzheimer’s Association or UNICEF. Arrangements are under the direction of the John Breen Memorial Funeral Home, Inc., 35 Merrimack Street, North Andover, MA. For online condolences and other information please visit www.breenfuneralhome.com.

The family of Ruth (Glennie) Petersen created this Life Tributes page to make it easy to share your memories.

Send flowers to the Petersen family.