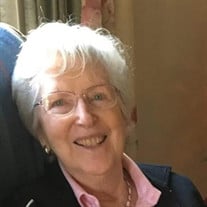 Rose Marie (“Ro”) Burke Burnley was born on February 1, 1927, in Syracuse, NY to Martin Michael Burke and Marie Katherine Cooney Burke, parents also of Robert Martin Burke and Edwin Cooney Burke. Ro graduated from Nottingham High School and Syracuse University, where she earned a bachelor’s degree magna cum laude in Home Economics in 1948 and a master’s degree in Education in 1951. In college, she was a member of Theta Phi Alpha and took up skiing. Ro had a diverse career in home economics. She began as a high school teacher in upstate New York, then moved to New York City to work for the National Dairy Council to represent ice cream manufacturers. She moved back to Syracuse to care for her mother, then returned to New York City in 1954 to work for appliance manufacturer Crosley. She next became a magazine writer focused on appliances for McCall’s, Redbook, and Good Housekeeping and later the editor-in-chief of Forecast for Home Economics. She joined the New York Ski Club, where she met Richard Nelson (“Dick”) Burnley. Ro and Dick married August 14, 1959, in Syracuse, and they traveled to South America to ski for their honeymoon. They took many ski vacations over the years to the Rockies and to Europe, and ultimately chose Snowmass, CO as their favorite. Ro and Dick had two daughters, Christine Birkholm and Susan Patricia. In 1970, Dick’s employer, Shell Oil Company, relocated the family to Houston, TX. Unable to pursue her career in Houston, Ro retired. She became active in the Memorial Area Newcomer’s Club and served as the first president of the Memorial Women’s Association, a social club made primarily of Newcomer’s Club alumni, and in numerous bridge and cooking groups. An excellent seamstress and cook, Ro spent many hours sewing clothing for her family and creating delicious meals under the close supervision of her beloved vizsla, Gregory. In 1982, Dick and Ro moved to Walden on Lake Conroe, north of Houston. Ro took up golf, and eventually had three holes in one. She continued to ski, even after Dick’s death in 1999, and took her last runs when she turned 80. In 2009, Ro moved to the Edgewood Lifecare Community in North Andover, MA, near daughter Susan. Ro is survived by daughters Susan Burnley and Christine Bucklin and grandchildren Kylie, Liam, Brynn, and Cara Moynihan and Laura, Marie, and Peter Bucklin.

The family of Rose Marie (Burke) Burnley created this Life Tributes page to make it easy to share your memories.

Send flowers to the Burnley family.