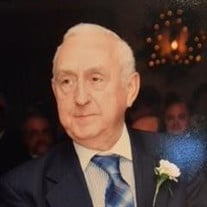 Mr. Ronald R. Gosselin, 79 of Methuen passed away peacefully on Friday, December 22, 2017 at Holy Family Hospital in Methuen surrounded by his family after a brief battle with mesothelioma. Born in Lawrence, MA on October 31, 1938 to the late Raymond and Lillian (Mathon) Gosselin. He attended St. Anne’s School. Mr. Gosselin enlisted in the United States Navy in 1955 and sailed on several vessels and visited many countries on his assignments. Upon his return to Lawrence, he met and married Ann J. Broadhurst in May of 1961. He was employed by Craig’s System in Lawrence and Amesbury for many years where he served as the Union Steward. Mr. Gosselin enjoyed spending time with his family. He especially loved vacationing with his grandchildren and attending their school and sporting events. The widower of the late Ann J. (Broadhurst) Gosselin who died in 1984, Mr. Gosselin is survived by his four children; Lynn A. and her husband David Storey of East Kingston, NH; Scott R. and his wife Jody (Brown) Gosselin of Methuen, MA; Brad J. and his wife Susan M. (Reidy) Gosselin of Methuen, MA; and Bryan and his wife Mary A. (Wheeler) Gosselin of Lawrence, MA. He is also survived by his five grandchildren; Stephanie A. and Haley L. Storey of East Kingston, NH; Jonathon R. Gosselin, Matthew B. and Michael S. Gosselin all of Methuen. He leaves a brother Gerard and his wife Carol Gosselin of Londonderry, NH and sister Marcelle and her husband Jay Howarth of Orange City, Florida as well as several nieces and nephews. He was the brother-in-law of the late Joan Cataldo and William Broadhurst. Family and friends may call on Thursday, December 28th, 2017 from 4-8 at the John Breen Memorial Funeral Home 122 Amesbury Street, Lawrence, MA. A Funeral Service will take place on Friday, December 29th, 2017 at 11:00 A.M. at the funeral home. A private family burial will take place at Elmwood Cemetery in Methuen, MA. In lieu of flowers, memorial donations may be made to: Saint Michael School, 80 Maple Avenue, North Andover, MA 01845. For online condolences and other information please visit us at www.breenfuneralhome.com.

Mr. Ronald R. Gosselin, 79 of Methuen passed away peacefully on Friday, December 22, 2017 at Holy Family Hospital in Methuen surrounded by his family after a brief battle with mesothelioma. Born in Lawrence, MA on October 31, 1938 to the late... View Obituary & Service Information

The family of Ronald R. Gosselin created this Life Tributes page to make it easy to share your memories.

Send flowers to the Gosselin family.