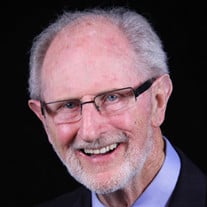 Roger A. Twomey, 89, passed away peacefully at Boston Medical Center on February 6, 2020 surrounded by his loving family. Roger was born in Lawrence, the son of the late Cornelius and Katherine Murphy Twomey. He graduated from Central Catholic High School & Merrimack College with a Bachelor’s degree in Economics and an Associate’s degree in Electrical Engineering. Roger served his country as a Staff Sargent in the Air Force during the Korean War and was honorably discharged in 1954. Roger worked at Lucent Technologies as a Senior Industrial Engineer where he retired after 36 years. He was a member of the former Sacred Heart Parish and served as Administrator of the Finance Committee. He was also co-director of the Right of Initiation of Adults for 10 years. Roger was a communicant at Our Lady of Good Council Parish and most recently a member of the choir. Shortly after retirement he was appointed Chairman of the Lawrence Licensing Commission where he served for six years. He was elected as a Councilor-At-Large and served for eight years with his trademark of Honesty, Integrity & Competence. He was dearly loved by all his constituents whom he served with the utmost respect. While serving the people in the City of Lawrence Roger was very passionate about providing clean and welcoming parks. He founded the Adopt-A-Park program where local businesses would provide services and resources to ensure the city’s parks were well kept. He was an avid supporter of the Lawrence High Boys Varsity Basketball team and would be found at their games alongside his wife Marilyn. Roger was very supportive of Lawrence’s Veterans and led many dedications around the city through monuments and benches named in their memory. He also held a Veteran’s Complimentary Pancake Breakfast for the past 10 years. Roger was recently recognized by Semana Hispana in Lawrence for his support of this organization over the years. Roger was blessed with “seven” grandchildren and enjoyed attending all of their special events both locally and in Colorado. Roger is survived by his wife of 59 years Marilyn McDonald Twomey; two sisters, Cornelia Kurchian and her husband Robert of Methuen and Geraldine Tollman of Nevada; daughter Lisa and husband Fred Faulkner of Westminster, Colorado; son Chris Twomey and wife Deborah of Methuen; grandchildren, Scott Faulkner and wife Elina, Kyle, Haley and Emily Faulkner all of Westminster, Colorado; Ray Maybury Jr. of Manchester N.H., Britney and Tori Twomey of Methuen and two great grandchildren Marina Faulkner and Lily Maybury; sister-in-law & brother-in-law Deborah & Leo Lamontagne of Lawrence, MA, along with many nieces, nephews, great nieces and great nephews. Roger will be deeply missed by his family, friends and the Twomey Team. North Andover School of Dance said; I’m sure all of you remember that Roger was our biggest supporter and mascot! He proudly wore his NASD jacket for many years. He and Marilyn attended all competitions Friday thru Sunday. He would sit in the front of the auditoriums and be proud of each of you! He attended the parades, many Spirit nights, always the last day of Master week to see our new and exciting routines. Marilyn and Roger always opened their home to our Master teachers to stay with them. He got the most joy watching all of you dance at our Winter shows and at each and every Recital. Center seat J101 will remain empty. He will always be a loved member of our NASD family. Calling hours will be held at the John Breen Memorial Funeral Home, 122 Amesbury St. Lawrence MA. Monday February 10th from 4-8 pm. Funeral services will be held at St. Augustine Chapel 128 Ames St. Lawrence, MA. Tuesday, February 11th at 10 am. In lieu of flowers the family requests that donations be made to Honor Flight New England, PO Box 16287 Hooksett, NH 03106 in memory of Roger Twomey.

Roger A. Twomey, 89, passed away peacefully at Boston Medical Center on February 6, 2020 surrounded by his loving family. Roger was born in Lawrence, the son of the late Cornelius and Katherine Murphy Twomey. He graduated from Central Catholic... View Obituary & Service Information

The family of Roger A. Twomey created this Life Tributes page to make it easy to share your memories.

Roger A. Twomey, 89, passed away peacefully at Boston Medical...

Send flowers to the Twomey family.