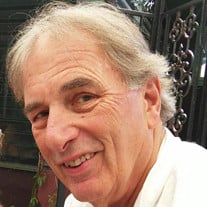 Robert A. Stewart, 75 passed away Nov. 10th 2017 at noon. Robert was born October 20, 1942 in Chicago, IL. His parents were William B. Stewart born in Elkhart, IN and Bertha Ione (Butterbaugh) Stewart born in Mount Morris, IL. In 1960, Robert graduated from Lakeshore High School where he was inducted into the Athletic Hall of Fame in 2014 as a four sport letterman & athlete of the year in 1960. He went on to attend Manchester College where “Bobby Andy” was a three sport letterman and earned his Bachelor of Arts in Teaching. Robert married Jean Ann Schwerdt of St. Joseph, MI, in 1967, while stationed in Okinawa for 3 years, employed by the Department of Defense Dependant Schools System. Together they spent the next 27 years at various military facilities in Germany where Bob taught school, coached various sports and they raised their two daughters. While overseas, Robert earned his Masters Degree in Math Education plus 30 credits towards his Doctorate. In 2001 Robert retired to Lawrence, MA to join his wife and daughters in the New England area. He taught math for several years at the Great Lawrence Technical School. Most recently he worked at the Merrimack Valley Golf Course in Methuen, MA. Robert was a member of the Lawrence, MA Elks Lodge #65. Robert is survived by his wife of almost 50 years, Jean Stewart of Lawrence, MA, his daughter Heather Milbourn of Ossipee, NH and his daughter Whitney Stewart of Andover, MA. He is also survived by his two brothers, Larry Stewart of Lake Worth, FL and Don Stewart of Whittier, NC and five grandchildren, Alex, Joie, Sam, Keller and Gus. Robert’s body is being cremated, and by his will, no memorial service will be held. If desired, memorials in Robert’s name may be made to The MSPCA at Nevins Farm, 400 Broadway, Methuen, MA 01844.

Robert A. Stewart, 75 passed away Nov. 10th 2017 at noon. Robert was born October 20, 1942 in Chicago, IL. His parents were William B. Stewart born in Elkhart, IN and Bertha Ione (Butterbaugh) Stewart born in Mount Morris, IL. In 1960, Robert... View Obituary & Service Information

The family of Robert A. Stewart created this Life Tributes page to make it easy to share your memories.

Send flowers to the Stewart family.