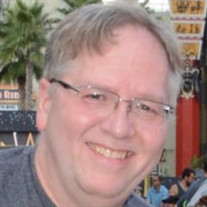 HAVERHILL - Robert J. Scharn, Jr. of Haverhill passed away on Sunday, July 26, 2020 at the Lawrence General Hospital at the age of 54, surrounded by his loving family., after a long, courageous battle against COVID-19. He was the beloved husband of Coleen M. (Bodenrader) Scharn for 32 years. Robert (Bob) was born in Methuen, MA on August 18, 1965, the son of Billie Alice (Todd) Scharn and the late Robert J. Scharn. He was educated in the Lawrence school system and graduated from Greater Lawrence Regional Tech in 1983. Bob was a dedicated employee of Parker Hannifin Corporation for over 32 years. In 2018, he was honored for his 30 years of service. Bob enjoyed spending time with his family and friends, attending family gatherings and cookouts, joke telling and dedicating his time to community events. Bob was a blood/platelets donor for over 20 years. Bob was a member of the Tower Hill Bowling League, Knights of Columbus of Salem, NH, where he worked in Bingo nights and he also assisted in coaching the boys’ basketball team at Consentino Middle School while his son was enrolled there. Bob was a committed Scoutmaster for many years for Troop 27 Haverhill. He was proud to mentor his son, Matthew, to become an Eagle Scout. In most recent years, Bob enjoyed being involved with local theatre companies, Acting Out! Theater Company and Spotlight Playhouse, as part of stagehand/tech crews in support of his son Matthew’s theatrical performances. Bob’s passions included family vacations to Disney, Stowe, Vermont, Cape Cod and more, as well as fishing, grilling, reading, being a die-hard New England Patriots fan, Marvel and DC comics, TV shows and movies, Walking Dead and Community (TV Show). He especially loved Christmas and spending quality time with his beloved family. Bob will be remembered for his loving manner, kind heart, sense of humour and his devotion to his family, of whom he was always willing to tell you how proud he was. His infectious laughter and constant smile brought light and warmth to every room he entered and every life he touched. He is survived by his loving wife, Coleen M. (Bodenrader) Scharn, his son, Matthew A. Scharn both of Haverhill, his mother Billie Alice (Todd) Scharn, his sisters Stacey (Scharn) Lavigne and her husband James, and Tammy (Scharn) Serverius and her husband Timothy all of Haverhill. He is also survived by his nieces and nephews, Scott (and his wife Alie), Todd and Amber Lavigne and Erin and Emma Serverius as well as his great niece, Lillian Lavigne. In addition, he is survived by his mother-in-law, Claire (Mignault) Bodenrader, sister-in law, Karen Bodenrader, many close aunts, uncles, cousins, numerous extremely close friends including Jim, Gene, and Ken, who were like brothers and his loyal cats, Carly, Jack, Max and, his best bud, Sheldon. Bob is predeceased by his father, Robert J. Scharn and his father-in-law, William J. Bodenrader. The family would like to thank the doctors and nurses at Lawrence General Hospital’s ICU unit for their dedication and the loving care they gave to Bob during his fight against COVID-19. It has brought great comfort knowing he was so well cared for and loved. Donations made in lieu of flowers will be used to honor Bob’s favorite cause, his son Matthew’s education. https://www.gofundme.com/f/matthew-scharn-college-fund-in-memory-of-his-dad Service arrangements will be announced at a later date.

HAVERHILL - Robert J. Scharn, Jr. of Haverhill passed away on Sunday, July 26, 2020 at the Lawrence General Hospital at the age of 54, surrounded by his loving family., after a long, courageous battle against COVID-19. He was the beloved husband... View Obituary & Service Information

The family of Robert J Scharn Jr. created this Life Tributes page to make it easy to share your memories.

HAVERHILL - Robert J. Scharn, Jr. of Haverhill passed away on...

Send flowers to the Scharn family.