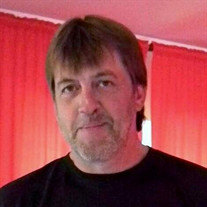 Robert Edward Lee passed peacefully at his home in Lexington Park, Maryland, on February 12, 2018, from complications following a brief illness. Born in Haverhill, Massachusetts on September 15, 1966 he was the son of Betty Ann Lee and the late James Emory Lee. Bob was a graduate of Haverhill High School Class of 1984 and served with the United States Marines from 1985 through 1989. He was a hard worker; supporting military helicopters both in the USMC and Contractor Support with Dyncorp and for the last sixteen years with Bell Helicopter. He was an expert in his field and the solution provider for any given circumstance. Bob will be remembered by so many, in countless ways. He was kind, smart, ambitious and funny. His quick wit served him well in any number of instances and was often the result of side-splitting laughter when his comment and facial expressions made it difficult to carry on a serious conversation. He did it on purpose and we came to expect and enjoy it. There was the serious side to Bob when it came to work and family. His work took him from coast to coast and overseas, but when time permitted he would come home to Haverhill for a week or so and always took the time to drive through his own memory lane; past his childhood homes, his grandfather’s land on Corliss Hill Road, and all the old familiar places that were part of his growing-up years. He missed little things that were gone or that had changed but so enjoyed the memories. Bob was an avid gardener and a “master” at building beautiful pieces of furniture for his family. He was a wonderful cook and enjoyed being in the kitchen listening to his favorite bands while preparing something special for his girls. There is a hole in the heart of the family he leaves behind. Left to remember the good times are his three daughters Kristen Norton, Shanon Lee , Robyn Lee, and his former wife Wendy Lee all of Maryland. His sisters Susanne Morse (Chuck) Haverhill, Jennifer Lee of Keene N.H. , Melissa Noyes (John) Sandown, N.H., Jessica Hennessey (Matthew)Haverhill, His mother Betty Ann Lee of Haverhill. He also leaves his Aunt Lorraine Woidyla, Haverhill and Barbara Rollins(Peter) of Holden, Mass. And several nieces, nephews and cousins. Robert was predeceased by his father James E. Lee in December, 2008 and by his Uncle Robert Lee who passed in Vietnam on February 17, 1966 (age24) and for whom our Robert was named. Bob’s family would like to invite all their loved ones and friends for a brief graveside ceremony at Walnut Cemetery in Haverhill, MA on Friday, March 2, 2018. Guests attending are asked to arrive by 2:45. Immediately following all are welcome to attend Bob’s Celebration of Life Memorial Dinner at the Plaistow Fish and Game Club on 18 May Ray Ave in Plaistow, New Hampshire. All are asked to come eat, drink, and celebrate Bob’s life. Arrangements are under the direction of the John Breen Memorial Funeral Homes. For online condolences and other information please visit us at www.breenfuneralhome.com.

Robert Edward Lee passed peacefully at his home in Lexington Park, Maryland, on February 12, 2018, from complications following a brief illness. Born in Haverhill, Massachusetts on September 15, 1966 he was the son of Betty Ann Lee and the late... View Obituary & Service Information

The family of Robert Edward Lee created this Life Tributes page to make it easy to share your memories.

Robert Edward Lee passed peacefully at his home in Lexington...

Send flowers to the Lee family.