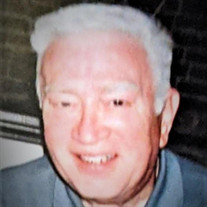 Robert F. Burke passed away at home surrounded by his loving family on Tuesday, July 28, 2020. He was born in Lawrence, MA on August 13, 1937 and was the son of Daniel and Theresa (Mixon) Burke. He attended the Holy Trinity School grammar school. He graduated from Central Catholic High School in 1954. He attended Merrimack College while serving in the Marine Reserves for two years before enlisting in the United States Air Force where he served until 1962. He was married to Mona (Maloney) Burke for over 62 years. He was predeceased by his parents, Daniel and Theresa Burke, and his brothers David and Daniel Burke. He is survived by his wife Mona, sons Bob (Kathy), Tom (Regis) and grandchildren: Conor, Caitlin, Meghan, Devin, Dylan, and Rory, sister Anne, sister-in-law Patricia Burke, brother-in-law Gerald Maloney and several nieces and nephews. Bob was a generous and caring person and will be deeply missed by his family and friends along with Bob and Kathy’s dog Tucker for whom he could always be relied upon to quietly feed under the table during dinner. For a good part of his life Bob worked two jobs often as a TV repair man and later at his own Burke’s TV and Sound while attending Lowell Tech to earn an associate’s degree in electronic engineering. He was a high school teacher for 27 years beginning in the Industrial Arts department at Lawrence High School and later at the Greater Lawrence Vocational High School where he was a very popular teacher in the electronics and computer departments. During that time, he earned a bachelor’s degree in education from Boston State College. He did this to provide for his family and to afford opportunities through education for his sons Bob and Tom. He was a loyal parishioner of St. Patrick’s Parish in Lawrence as well as dedicated member of Division 8 of the Ancient Order of Hibernians for over 50 years. He was Division 8’s first webmaster and in 2006 he was honored as “Irishman of the Year”. He was also a member of American Legion Post 122 in Methuen, MA and the Greater Lawrence Vocational School Retired Teachers Association. Along with his brother David, he had an ardent interest in tracing his family’s Irish roots long before computers and the internet. Their research involved writing letters in longhand, visiting churches for baptismal and marriage records and many long-distance phone calls. Later, in retirement he read widely, developed wonderful stamp and coin collections, and was a computer hobbyist. His greatest joy and fulfillment came from his long happy marriage to Mona and spending time with his sons, Bob and Tom, their wives Kathy and Regis and his 6 grandchildren. He was their loving “Papa” who would hide toys in the magic chair, produce a pony at a birthday party and always took a keen interest in their every activity. The family wishes to thank Merrimack Valley Hospice for their compassionate help during these last weeks which allowed him to be at home with his family. In lieu of flowers the family suggests that you consider a donation to St. Patrick’s Parish at 118 South Broadway, Lawrence, MA 01843 or Merrimack Valley Hospice, 360 Merrimack Street, Bldg 9, Lawrence MA, 01843 Attn. Development Office. Relatives and friends are invited to attend visiting hours on Monday, August 10, 2020, from 4:00 to 8:00 pm, at the John Breen Memorial Funeral Home, 122 Amesbury Street, in Lawrence. There will be a graveside service Tuesday, August 11, 2020 at St. Mary-Immaculate Conception Cemetery at 11:00am. For more information or to send an online condolence please visit our website at: wwwbreenfuneralhome.com.

Robert F. Burke passed away at home surrounded by his loving family on Tuesday, July 28, 2020. He was born in Lawrence, MA on August 13, 1937 and was the son of Daniel and Theresa (Mixon) Burke. He attended the Holy Trinity School grammar... View Obituary & Service Information

The family of Robert F. Burke created this Life Tributes page to make it easy to share your memories.

Robert F. Burke passed away at home surrounded by his loving...

Send flowers to the Burke family.