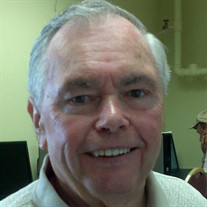 Richard G. “Jake” Zahn, 83 of Lawrence, Massachusetts passed away on Friday, September 28th, 2018 at the Prescott House Nursing Home in North Andover, MA. He was born in Lawrence on August 30, 1935, son of the late Raymond and Winifred (Dagenhart) Zahn. Jake was educated in the North Andover Schools, graduating class of 1953 from Johnson High School, he later attended Boston University Business Courses. Jake served in the United States Airforce Reserve as Staff Sergeant. He was Parishioner of Saint Patrick’s Church and worked for the City of Lawrence Tax Office until his retirement. He had received his Private Pilot License and enjoyed Dancing. Jake served on the Airport Commission from 1985-1995 and the last 3 years as Chairman of the Board. He was on the Executive Board of Boy Scouts for 10 years, a Cub Scout Leader and Boy Scout Leader. He served 2 years as the Catholic Lay Chairman, 20 years as a Eucharistic Minister at Saint Patrick’s Church, a life member of the Knights of Columbus, a member of the Lawrence British Club, and a fund raiser for many Parish Projects. His family member include His beloved wife of 59 years Carol A. (Lavin) Zahn His sons: Brian P. Zahn of Lawrence, MA Kevin S. Zahn and his wife Nicole Zahn of Methuen, MA Grandsons: Michael, B. Patrick and Kegan Zahn Brothers: Raymond Zahn of Florida, Ralph and his wife Sharon Zahn of Methuen, MA., Ronald and his wife of NH, Sister-in-law Marylou Zahn of Maine Former daughters-in-law Christine (Zahn) Leoncyk of NH and Patricia Zahn of NH, as well as several nieces and nephews. Father of the late James M. Zahn Brother of the late Frances, Sarah and Robert. Relatives and friends are cordially invited to call on Wednesday, October 3rd, 2018 from 3:00 p.m. to 7:00 p.m. at the John Breen Memorial Funeral Home, Inc., 122 Amesbury Street, Lawrence, MA. His funeral mass will be celebrated on Thursday, October 4th, 2018 at 11:00 a.m. in Saint Patrick’s Church, Lawrence, MA. Burial will follow in the Holy Sepulchre Cemetery in North Andover, MA. Memorial Contributions may be made to Saint Patrick’s Church, 118 S. Broadway, Lawrence, MA 01843. For online condolences and other information please visit us at www.breenfuneralhome.com.

The family of Richard G. "Jake" Zahn created this Life Tributes page to make it easy to share your memories.

Send flowers to the Zahn family.