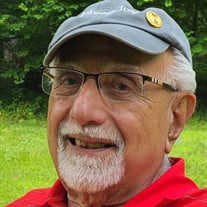 Richard Michael Tahan, 93, of Exeter, NH passed away suddenly on May 31, 2022. Richard was born on October 18, 1928 to Michael and Elizabeth (ne’e Abounader) in Lawrence, MA. One of his earliest memories was meeting FDR who was visiting the Boston hospital where Richard was being treated for the polio he had contracted at age 3. The remarkable resilience he demonstrated throughout his life was a result of 9 years undergoing surgeries, braces, and treatment that permanently limited the movement in his right (dominant) arm. Despite these challenges, he learned to use his left arm masterfully, exhibiting extraordinarily beautiful handwriting and highly skilled oil painting. His artwork was displayed proudly at an exhibit in Exeter when he was 90 years old. Richard graduated from Lawrence High School in 1946 and from Massachusetts College of Pharmacy 4 years later. His kindness and generosity along with his business acumen shone through in his successful career as a pharmacist, owning his own stores and serving the communities of Haverhill, MA and Plaistow, NH for decades. In the mid-1970’s, Richard turned his attention to hospital pharmacy work. Richard retired in 1991, having spent his final 10 years of employment at the Hale Hospital where he was beloved and honored by his coworkers for his graciousness and professionalism. In 1953, Richard and Teresa (Bardwell, also of Lawrence, MA) were married. Their 62 years together were full of adventures, travel, friends, and their loving family. Teresa passed away in 2015 with Richard by her side, where he could be found every day of her final 4 years as she resided in skilled nursing care. Richard will be remembered for his infectious laugh, warmth, friendliness, and sharp intellect. He was an avid reader, a student of history, and a wise investor right up until his final days. He had a passion for Boston sports, a fine cigar, and a good scotch. Richard will be deeply missed for a very long time by his five devoted children and their families: Richard Jr. and his wife, Lucia, of Charleston, SC, David and his wife, Heather, of Plymouth, MA, Michael and his wife, Bonnie, of Kennebunkport, ME, Patricia and her husband, Jeffrey Glasser, of Fort Collins, CO, and Stephen and his wife, Kelly, of E. Hampstead, NH. His loss will be equally felt by his 11 grandchildren and 10 great-grandchildren, his brother, Theodore and his wife, Evelyn, of St. Louis, MO, and his brother-in-law, Ian Fraser, of Hookset, NH. Richard joins his sister, Claire, whom we lost in 2011. At Richard’s request, funeral arrangements will be held privately.

Richard Michael Tahan, 93, of Exeter, NH passed away suddenly on May 31, 2022. Richard was born on October 18, 1928 to Michael and Elizabeth (ne&#8217;e Abounader) in Lawrence, MA. One of his earliest memories was meeting FDR who was visiting... View Obituary & Service Information

The family of Richard M. Tahan created this Life Tributes page to make it easy to share your memories.

Send flowers to the Tahan family.