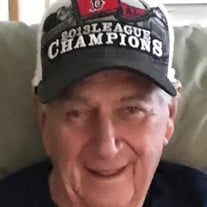 Philip A. Anderson, 88, a resident of Salem, NH and DeBary FL, passed away peacefully at his home with his loving wife Helen by his side. Born in White Plains, NY, Phil was educated in White Plains for 1st graded before moving to North Andover and attending the North Andover Schools until he finished 8th grade. He then moved to Lawrence and graduated from Lawrence High School in 1951. Phil served in the United States Army as a Sharpshooter during the Korean Conflict. He had a long career in the Telephone Industry having started at AT&T, then going to New England Telephone, Verizon and then retiring from Nynex after 35 years. Phil was a longtime member as well as past president and Paul Harris Fellow recipient of the Methuen, MA-Salem, NH Rotary Club, he was a member of the Methuen Knights of Columbus where he would play 45’s every Friday night for 30 years. Phil was a member of the Methuen V.F.W. and had also been a member of the Lawrence Lodge of Elks. He was an avid golfer and reader. Phil enjoyed taking walks and was a gifted woodworker. Phil was known for his quick wit and was a big sports fan especially the Red Sox. He traveled across the globe with Helen to places like Scotland, Rome, France, the Canadian Provinces, and many of the Islands. Members of Phil’s family include his loving wife of 66 years Helen R. (Lejeunesse) Anderson, a daughter Jeanne Mosher and her husband Matthew of Atkinson, NH, a son Scott Anderson and his wife Wendy of Windham, NH, grandchildren: Jacqueline White, Cassie Cloutier, Alyssa Hunt, Justin Mosher, Angela Anderson, and Samantha Anderson. He is also survived by his greatgrandchildren: Emerson, Navy, Natalie, Griffin, Kennedy, Adam, Haven and Leighton. A special thank you goes to Kim DeFruscia, R.N. who was a special friend and neighbor and helped Helen get through a very tough time. “The cards and card table are ready, and the gang is waiting to greet you. You will always be loved and remembered in our hearts.” Relatives and friends are invited to call on Tuesday, December 21,2021 from 10:00 A.M. to 1:00 P.M. at the John Breen Memorial Funeral Home, Inc., 35 Merrimack St., North Andover, MA. A Funeral service will immediately follow at 1:00 P.M. Burial with Military honors will follow in the Ridgewood Cemetery, 177 Salem St., also in North Andover, MA. In lieu of flowers, memorial contributions may be made in Phil’s name to either the New England USO at [email protected] or to the Wounded Warrior Project, P.O. Box 758516, Topeka, KS, 66675-8516. To send an online condolence or for more information, please go to www.breenfuneralhome.com.

Philip A. Anderson, 88, a resident of Salem, NH and DeBary FL, passed away peacefully at his home with his loving wife Helen by his side. Born in White Plains, NY, Phil was educated in White Plains for 1st graded before moving to North Andover... View Obituary & Service Information

The family of Philip A. Anderson created this Life Tributes page to make it easy to share your memories.

Send flowers to the Anderson family.