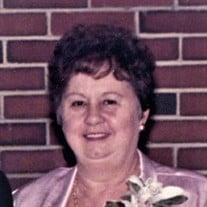 Noreen Lyons, 87, of Salem, New Hampshire passed away peacefully on December 21, 2017 surrounded by her loving family. Born to the late Edward J. and Helen (Dowling) Moynihan, she grew up in Lawrence, MA before moving to Methuen, MA to raise her own family. Noreen graduated from Lawrence High School (Class of 1947). She then went on to attend McIntosh Business School. Following her graduation, she worked for several years as a payroll clerk for Service Wood Heel and then for Oomphies Shoe Co. She subsequently went on to work part-time as a teller for Baybank in Methuen. MA. Noreen was a devoted wife, mother and grandmother. She enjoyed spending time with her children, while they were young. at the family's cottage in Seabrook Beach as well as later spending time each summer with her grandchildren at Lake Winnisquam and Old Orchard Beach. Noreen also enjoyed traveling, having had the opportunity to travel with her husband to places including: Aruba, Las Vegas, and Ireland. She also enjoyed spending time with her mother and friends playing bingo as well as participating for many years in various local bowling leagues. Noreen is survived by her husband of 60 years, Daniel J. Lyons, Jr., and three children, Anne Marie (Lyons) Wilbar, Esq. and her husband, Steven of Derry, NH; Daniel E. Lyons, MD and his wife, Lisa, of Andover, MA; and Barry Lyons of Hampstead, NH. She is also survived by her five grandchildren: Robert Lyons, Nicole Lyons, Christopher Wilbar, Katherine Lyons, and Emily Lyons; as well as her sister, Sheila (Moynihan) Barry and her husband, James Barry, of Haverhill, MA and several nieces, nephews and many "special" cousins. A funeral mass will be celebrated on Thursday, December 28, 2017 at 11:00AM at St. Monica Church, 212 Lawrence St. Methuen, MA. A burial will follow in the Immaculate Conception Cemetery in Lawrence. Friends and family may call on Wednesday, December 27, 2017 from 4:00 to 8:00 PM at the John Breen Memorial Funeral Home Inc. 122 Amesbury St. Lawrence, MA. 01841. For more information or to leave an online condolence please visit our website at www.breenfuneralhome.com.

Noreen Lyons, 87, of Salem, New Hampshire passed away peacefully on December 21, 2017 surrounded by her loving family. Born to the late Edward J. and Helen (Dowling) Moynihan, she grew up in Lawrence, MA before moving to Methuen, MA to raise... View Obituary & Service Information

The family of Noreen P Lyons created this Life Tributes page to make it easy to share your memories.

Send flowers to the Lyons family.