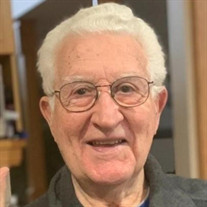 Lawrence, MA and Kennebunkport, ME — Nick Maucieri, 90 is once again dancing with his wife, best friend and love of his life in heaven. After a brief illness, we all lost this one-of-a-kind man on October 9th, 2021. Born in Andover, Massachusetts on March 22, 1931, the son of Nicola and Helen (Feoli) from Italy and Rhode Island respectively. Nick spent most of his adult life in Lawrence, Massachusetts. Nick started his professional career at Raytheon Technologies in 1959 he retired in 1992 after 33 great years. Nick’s children, grandchildren and beloved niece say it best: “He was a man of few words, his power and strong influence, wisdom and gentle spirit, kindness and mild temperament pushed each person he met to just……..be better.” His unconditional love for his wife and family was just something that you don’t see often enough. He was truly a peacemaker and was always a source of positivity. In his day, Nick was a sought-after athlete. He was a graduate of Andover High School where he lettered in track, baseball and was a star football player; in 1950 he was inducted to the Punchard/Andover High School Hall of Fame. Nick was recruited by a number of college/university teams and selected Arizona State University at Tempe where he played football, as a Center, for the Sun Devils. He was proud to hold a Lifetime Pass awarded by The Associated Students and The Board of Athletic Control in recognition of loyalty and service to the athletic team. A highlight of his football career was in 1953 when the Arizona Republic Newspaper highlighted his accomplishments with a picture and article titled “Pivot Man”. He was offered a slot on an NFL team but, although the decision was tough, he wanted to follow through his commitment to ROTC and served his country as a Marine Stationed in Okinawa Japan. In July of 1962, Nick received an honorable discharge as First Lieutenant of a tank brigade. Nick was also an avid outdoorsman; he particularly enjoyed hunting and fishing with his sons, and best friend Arthur Hembrough . He looked forward to hunting season, whether it was duck, geese or deer using bow, powder or rifle, bringing home food for the freezer was always the goal. He held a permanent lifetime license in the state of Maine from the Department of Inland Fisheries and Wildlife. Fishing from his Boston Whaler was a regular summer sport and the family looked forward to fresh seafood dinners. Nick enjoyed 52 summers at Gooserocks Beach in Kennebunkport, Maine where he built his family summer home with his brother-in-law Ralph. He enjoyed his garden, jogging, reading and his many friends. Left behind to carry on Nick’s legacy are his sons Nick Jr. and wife Debbie (Tyrrell) of Kennebunkport, Maine; Rob and wife Diane of Hudson, New Hampshire, Grandchildren; Jeremy Sweeney and wife Kristen of Westford, Massachusetts; Melodee Brown and husband Marquise of Sebastian, Florida; Shawn Paprocki, Jessica, Amanda and Robert Maucieri Jr. of Hudson, New Hampshire. Nick is also survived by his sister-in-law Eleanor Traverso and husband Ralph, Nick’s very special and loved niece Maribeth Traverso of Lawrence Massachusetts. There are many great grandchildren, nieces and nephews not mentioned, but never forgotten. Nick was predeceased in death by his wife and love of his life Ann (DiBetteto), his sister Constance Molinari of Salem New Hampshire, brother and sister-in-law Michael and Ethel DiBitetto of Venice Florida, and his great grandson Tyson Nicholas Girardo of Utah. We will always remember his wisdom, love, energy and his love for family, friends and life. He made a difference in the lives of many. We invite you to join us and celebrate his life together. Relatives and friends are cordially invited to call on Saturday, October 16th, from 8:30 am to 9:45 am at the John Breen Memorial Funeral Home, Inc. 35 Merrimack Street, North Andover followed by the funeral service at 10:00am at St. Michaels Church and burial in the Immaculate Conception Cemetery in Lawrence, MA. For online condolences and other information please visit us at www.breenfuneralhome.com.

Lawrence, MA and Kennebunkport, ME &#8212; Nick Maucieri, 90 is once again dancing with his wife, best friend and love of his life in heaven. After a brief illness, we all lost this one-of-a-kind man on October 9th, 2021. Born in Andover,... View Obituary & Service Information

The family of Nicholas Richard Maucieri Sr. created this Life Tributes page to make it easy to share your memories.

Lawrence, MA and Kennebunkport, ME — Nick Maucieri, 90 is once...

Send flowers to the Maucieri family.