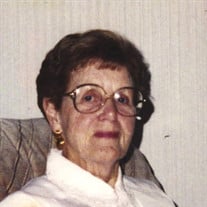 Mildred Frances (Levis) McKernan passed away at the age of 95 after a period of declining health. Born on July 1, 1922 in Lawrence, MA., she was the youngest child of Bridget Naughton and Thomas Levis, both from Ireland. Mildred graduated from St. Patrick’s Grammar School and subsequently St. Patrick’s High School. Pursuing a career in nursing, she attended the Lawrence General School of Nursing where she graduated in 1943. During WW II, she served as an ensign in the U.S. Navy at the Naval Hospital in Chelsea, MA. Mildred married Francis Charles McKernan in 1948 at St. Patrick’s Church. Widowed at an early age, she returned to her nursing career, working in local nursing homes including Stevens Hall in North Andover where she worked for several years. As a life-long parishioner of St. Patrick’s Church, she belonged to the Lady’s Sodality, and many other organizations where she donated her time and talent. Mildred’s life was one of service to others; she was a loving daughter, a devoted wife, an exceptional mom and nana. She will be missed by all whose lives were enriched by her presence. She is survived by two daughters: Kathleen Moreau and her husband Paul of Plaistow, NH; Patricia Benjamin of North Andover, MA; and three sons: Francis McKernan and his wife Debra (DeSantis) of Methuen, MA; Thomas McKernan and his wife Susan (Lawlor) of Hampton, NH; and John McKernan and his wife Maria (Barker) of Temecula, CA. Her granddaughters include: Tara (Benjamin) Brown, Kimberly (Moreau) Kaloustian, Kelly (Moreau) Beresford, Brigid (McKernan) Gosselin, Meaghan McKernan, and Sarah and Grace McKernan. Mildred has 7 grandsons: Patrick and Kevin McKernan, Francis McKernan III, John, Matthew, Kevin and Andrew McKernan. Mildred also has 9 great grandchildren: Dylan and Zachary Brown, Sofia and Sadie Kaloustian, Caleb and Avery Beresford, Olivia and Eric Michael Gosselin and Adrienne McKernan. Several nieces and nephews are among her survivors as well as Lucille McKernan, Mildred’s sister-in-law. Mildred is predeceased by her husband Francis C. McKernan who served as a Lawrence firefighter for over 21 years. Her deceased siblings are Joseph and Wilfred Levis, Cecelia Herward and Lena Markey. Relatives and friends are respectfully invited to visiting hours on Tuesday, September 5th, 2017 from 4 to 8 p.m. at the John Breen Memorial Funeral Home on 35 Merrimack Street in North Andover, MA. A funeral Mass will be held on Wednesday, September 6, 2017 at 11:00 a.m. at St. Patrick’s Church in Lawrence, MA, followed by burial at the Holy Sepulchre Cemetery in North Andover, MA. In lieu of flowers, Mildred asked that contributions be made to the Cor Unum Meal Center at 118 So. Broadway, Lawrence, MA 01843; St. Patrick’s Church at 118 S. Broadway, Lawrence, MA 01843; or the Maryknoll Lay Missioners (at mklm.org) or by mail to PO Box 307, Maryknoll, NY 10545.

Mildred Frances (Levis) McKernan passed away at the age of 95 after a period of declining health. Born on July 1, 1922 in Lawrence, MA., she was the youngest child of Bridget Naughton and Thomas Levis, both from Ireland. Mildred graduated... View Obituary & Service Information

The family of Mildred Frances McKernan created this Life Tributes page to make it easy to share your memories.

Mildred Frances (Levis) McKernan passed away at the age of 95...

Send flowers to the McKernan family.