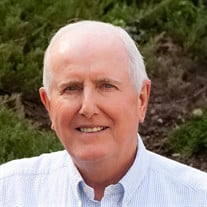 Michael Grant Sr. passed away peacefully at Brigham and Women’s Hospital on January 14, 2022, following a lengthy illness. He was surrounded by his family. Michael, born on May 6, 1941, was the son of Stephen and Emma(White) Grant of Lynn. He was a graduate of Lynn Classical, class of 1958. Following high school, he joined the Navy and was stationed in Alaska where he worked as a firefighter. After he returned home, he soon met and married Cheryl Anderson, also of Lynn. Michael worked at GE Riverworks as a welder and was proud to earn his associate’s degree from North Shore Community College while raising his family. Truly a hands-on dad, Michael was happiest when he was home with his wife and children. He had a knack for planning fun adventures for his children. Whether it was tobogganing in the Lynn Woods, or cross-country skiing in the White Mountains, Michael cherished family time most of all. Following his retirement in 1996, Michael enjoyed golf, playing in such locales as St. Andrew’s in Scotland and Pebble Beach in California. A history buff, he jumped at the chance to plan trips with his wife and family and often sought out interesting attractions during their travels throughout the U.S. and Europe. Particular highlights included the Swedish genealogical trip he planned with his wife to discover her ancestral history and a trip with his entire family to Paris and Omaha Beach in Normandy, France. Michael also cherished annual trips to Disney World and Hilton Head with his family, where his quiet but certain humor and enthusiasm created countless memories. Michael also appreciated the simple pleasures in life, such as a trip to Hampton Beach to grab a lobster roll with his wife or an outing to take his grandchildren bowling or mini-golfing. A proud and devoted grandfather, Michael was a constant presence during the many academic milestones and athletic competitions of his 4 grandchildren. He was also a loving owner to many lucky dogs over his lifetime, last of whom was his beloved Benji. Michael will be dearly missed by his family. Michael is survived by his wife of 57 years, Cheryl Grant of Haverhill, his son Michael Grant Jr. and his wife Katherine of Haverhill, his daughter Kristin Connelly and her husband Tom of Amesbury. He had 4 grandchildren, Connor and Emily Grant, Ryan and Rachel Connelly. He is also survived by his sister Charlene Kiley and her husband Daniel. He is preceded in death by his sister Peggy, and survived by her husband Nicholas Meninno. Michael is also preceded in death by his brother-in-law Richard Anderson and is survived by Richard’s wife Sharon. He had many beloved nieces and nephews. Arrangements: A funeral mass will be held at St. Michael’s Church in North Andover at 10:00 a.m. on Thursday, January 20th. There will be no calling hours due to the COVID-19 pandemic. In lieu of flowers, you may send donations in Michael’s name to the MSPCA in Methuen, where he and his wife adopted two of their dogs.

Michael Grant Sr. passed away peacefully at Brigham and Women&#8217;s Hospital on January 14, 2022, following a lengthy illness. He was surrounded by his family. Michael, born on May 6, 1941, was the son of Stephen and Emma(White) Grant of Lynn.... View Obituary & Service Information

The family of Michael Stephen Grant, Sr. created this Life Tributes page to make it easy to share your memories.

Michael Grant Sr. passed away peacefully at Brigham and Women’s...

Send flowers to the Grant, family.