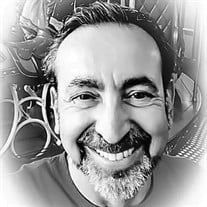 Michael Stanley Cubelli, 55, died unexpectedly of a sudden heart attack on Saturday, September 22 at his home in Derry, NH. Born in Lawrence, MA on July 18, 1963, Michael was the son of the late Madelyn Irene (Harris) Cubelli and the stepson of the late Matthew Spencer Harris, Jr. Michael left Lawrence High School in 1981, completed his GED and enlisted in Air Force where began his career as a Sargent with the Military Police in Germany. He was transferred to Myrtle Beach, South Carolina, where he completed a Certificate in Law Enforcement at the Community College of the Air Force at SC State University. In later years he also graduated with a certificate in Patisserie and Baking from the College of Culinary Art at Le Cordon Bleu in Atlanta, GA. Upon his discharge in 1986 Michael worked as a Police Officer for the City of Myrtle Beach. Over the span of his 30-year career in South Carolina he served as a SWAT Officer, a detective for the West Columbia and IRMA Police Departments, and at the Richland County Sheriff’s Department. In 2017, after the sudden death of his ex-wife of 10 years, Karen Elizabeth James Cubelli, Michael retired from the South Carolina State University Police Department in Orangeburg, and relocated with his children back home to New England. Michael enjoyed many hobbies and was well known for his delectable cakes and pastries. He traveled with the Iron Pigs Motorcycle Club for 20 years. He had an extensive fire arms collection and trained others in proper technique. He also trained his fellow officers in Karate. He was an active member of the Italian Social Club on Facebook, and an enthusiastic Boston sports fan. Michael was so happy to be able to take his children to their first Red Sox and Patriots’ games this year. Michael is survived by his daughter, Juliana Irene, and his son, Carmine Joseph; his sister, Michele Cubelli Harris of Methuen, MA, and brothers, Matthew S. Harris, III, and Marc T. Harris, both of Lowell, MA; step sisters, Maxine Woods and her husband Albert, Mona Harris-Tyree and her husband Raymie, and Melody Harris Rivera, all of Lowell, MA., and a step brother, Matt Allen of New York; Michael is also predeceased by his maternal grandparents, Joseph Cubelli and Sadie (Cubelli) Legros, paternal grandmother, Sadie (Harris) Williams, and his step sister Mara Pappalardo. Michael held a very special place in his heart for his many nieces, nephews and cousins. Family and friends may call on Monday, October 1 from 4-8 pm at Breen Funeral Home, 122 Amesbury Street, Lawrence, MA. A Mass will be celebrated 10:00am on Tuesday, October 2, at the Funeral Home followed by a Burial at Bellevue Cemetery. For online condolences and other information please visit us at www.breenfuneralhome.com.

Michael Stanley Cubelli, 55, died unexpectedly of a sudden heart attack on Saturday, September 22 at his home in Derry, NH. Born in Lawrence, MA on July 18, 1963, Michael was the son of the late Madelyn Irene (Harris) Cubelli and the stepson... View Obituary & Service Information

The family of Michael Stanley Cubelli created this Life Tributes page to make it easy to share your memories.

Send flowers to the Cubelli family.