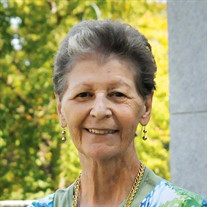 Maureen G. Perkins, long-time teacher and faculty member emerita at Brooks School and tireless social justice activist, died on Saturday, January 13, from cancer and its complications. She was 76. A native of Williamstown, Maureen left the Berkshires to attend Jackson College (which later merged with Tufts University), studying French with the aim of becoming a teacher. There she stood against racial discrimination in the Greek system, joining the independent, inclusive sorority Alethea and ultimately serving in its leadership. She also met the love of her life, Leonard S. “Skip” Perkins, at Tufts. The two married upon her graduation in 1963 and started their life together as boarding school teachers, first at Avon Old Farms School in Connecticut, and then at Brooks School in North Andover, where they made their life. Mrs. Perkins, as generations of her students called her, was widely known for her selfless care for others. Her dedication to her family and her students were prime examples, but it was her advocacy on behalf of all who struggled to have a voice that defined her. Between her work with countless organizations in the Merrimack Valley, most significantly the Lawrence Boys & Girls Club (which presented her with the Jeannie Melucci Award in 2007 for dedication “far beyond the call of duty”), and her decades-long leadership of the Brooks School Community Service program, Mrs. Perkins lived the values she taught every day. The Greater Lawrence YWCA honored her in its 2012 Tribute to Women for her 45-year legacy of service in the region. A lifetime sports fan who attended all the games her children played and husband coached (though she never quite forgave him for leaving the birth of their son for a hockey game), Mrs. Perkins gladly shared her knowledge with young coaches as they took up their whistles at Brooks, and often had advice for Bill Belichick as she religiously watched her Patriots triumph. Her perpetual care for others in the face of the many challenges life threw at her is what many will remember her for. She cared for her husband on her own for 16 years after he was rendered quadriplegic in a surfing accident, and never settled for anything less than a full life despite three bouts of cancer, which decimated her body but never her spirit. She continued to make her way to the gym to work out, to the courts to cheer on the Brooks basketball team, and to walk someone’s dog around campus for exercise. Her pattern of defying her physical limitations to support others held true until the week she died. The advent of social media gave Mrs. Perkins a new avenue for her activism: the Internet. Over the last several years she enjoyed connecting with hundreds of old friends and former students, and making new allies in her perpetual fight for equality for all. Attending rallies, knitting hats and contacting elected officials taking them to task for policies that harmed “the little guy” kept her busy and energized. It is her fiery presence on social media that many will miss most. There she broadened her impact, continuing to challenge those around her not to become complacent or complicit. Mrs. Perkins was the daughter of Margaret (Seymour) and James Grady of Williamstown. Predeceased by her husband Skip, she leaves her daughter, Leigh, of North Andover and son, Tod, and his wife, Rose, of Lancaster; her siblings Margaret Weyers of Pownal Vt., Fredricka Brown of North Adams, and James Grady of Williamstown and their families; her dear cousin Barbara Joffe of Aurora, Ill.; and her grandchildren, Samantha and Jake Perkins Grant and Kayla and Shannon Perkins, whom she loved more than anything and of whom she was endlessly proud. She is remembered with love by thousands of students and colleagues she taught and cared for. All who knew her were better for her influence. There will be a private service for family and close friends on Superbowl Sunday (of course; go Pats!), and a public celebration of her life at Brooks School over Alumni Weekend in May. In lieu of flowers, friends are invited to donate to a fund at Brooks School being set up in her name. At her request, please don’t wear black. Instead, honor her life by living yours well.

Maureen G. Perkins, long-time teacher and faculty member emerita at Brooks School and tireless social justice activist, died on Saturday, January 13, from cancer and its complications. She was 76. A native of Williamstown, Maureen left the Berkshires... View Obituary & Service Information

The family of Maureen G Perkins created this Life Tributes page to make it easy to share your memories.

Send flowers to the Perkins family.