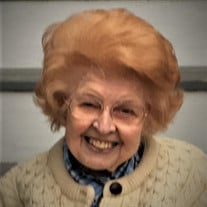 MaryLouise (Coulombe) Boddy died peacefully August 23, 2018. She was born May 28, 1926 in Boston, MA to Catherine A. (Ryan) Coulombe and Joseph Coulombe. Her parents met while working at the Poland Springs House in Poland Springs, Maine. Her father died when she was aged 2, and her family returned to Methuen, where she was raised. She spent many childhood summers with her Aunt Margaret and Uncle Ed Jackson in Maine. She was proud to have graduated from the Edward F. Searles High School in 1944 where she served as a class officer and played on the basketball team. She graduated from Colby College in Waterville, ME, with a degree in English. After graduation, she worked at Curran and Joyce Tonic, where she met her husband. She valued education highly, ensuring that her children not only had college degrees but graduate degrees. Her own graduation from Colby College established a life-long family connection with the College, with her son graduating with the Class of 1984 and her grandson as a member of the Class of 2020. She looked forward to attending his graduation. She enjoyed volunteerism and community service; serving as a Girl Scout Leader at Christ Presbyterian Church, Lawrence; as a member of the Lawrence High School Band Parents Association in the 1960s; as a class officer and reunion organizer for the Methuen High School Class of 1944, as an activist in the Prospect Hill/ Back Bay Neighborhood Association, and, in the 1990s, as the Treasurer for the Rollins School Clock Tower Restoration Committee. She was appointed by Mayor Dowling, and reappointed by Mayors Sullivan and Lantigua, to Lawrence’s Bellevue Cemetery Board of Directors, serving for more than 16 years with many years as Chairman. It became her passion later in life. During her tenure she was responsible for the Cemetery’s placement on the National Register of Historic Places, for grants to restore the historic Hearse House, for Re-Leaf Grants for trees, and for many capital improvements, including repaving roads in the historic Old Yard. In the early 1970s, recognizing the influx of Spanish–speakers to her hometown, she took Spanish classes, encouraged bilingualism, and committed family members to becoming fluent in the language. She was a communicant of St. Laurence O’Toole Church and later St. Mary’s Church, Lawrence. Over the years, she enjoyed many summers with her family at Little Island Pond, Pelham, NH. She was predeceased by her husband, Charles D. Boddy, Sr. in 2014. She is survived by her daughters and sons- in-law, Jane and P.T. Hart of Bridgewater, NH, Marjorie and Charles Haggerty of Andover; her son and daughter- in- law, Anne (Donahue) and Attorney Charles D. Boddy, Jr. of Bellingham, MA; granddaughters Kathryn (Hart) Steele and Linda (Hart) Greenwood, grandsons, Sean and Michael Boddy of Bellingham, four great grandchildren, Emma and Sloane Steele, and Nicholas and Matthew Greenwood, a niece, several nephews, and their families. Calling hours will be Friday, August 31 from 4pm to 8 pm at Breen Memorial Funeral Home, 122 Amesbury St. Lawrence, MA. A Rite of Christian Burial will be held 10:30 am Saturday, September 1 at St. Monica’s Church, Methuen, MA. Burial will be at the Bellevue Cemetery, Lawrence. Memorial contributions can be made to the Christian Fellowship Church of the Merrimack Valley, PO Box 2181, Methuen, MA 01844.

MaryLouise (Coulombe) Boddy died peacefully August 23, 2018. She was born May 28, 1926 in Boston, MA to Catherine A. (Ryan) Coulombe and Joseph Coulombe. Her parents met while working at the Poland Springs House in Poland Springs, Maine.... View Obituary & Service Information

The family of MaryLouise Boddy created this Life Tributes page to make it easy to share your memories.

Send flowers to the Boddy family.