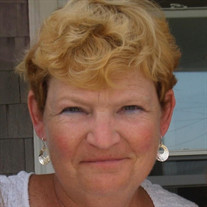 With great sadness we announce the passing of Mary Anne (L’Italien) Waisanen on January 28 at the age of 64 at Port Health Care in Newburyport, MA, following a period of declining health. She is survived by her husband of 34 years, Waino Waisanen, of Hampton Beach, NH. Mary Anne was the daughter of Rudolph Joseph and Claire (Sullivan) L’Italien. Born in Cheverly, MD, she spent her early childhood years in Chevy Chase, MD and Rutherford, NJ before moving to Andover, MA in 1967. Mary Anne excelled both academically and athletically at Andover High School, where she was a National Honor Society member and captained both the girls’ softball and basketball teams. She had a passion for music and performed in the school choir and numerous musicals, including Mame and The Music Man. Mary Anne attended Salem State University, graduating with dual teaching degrees in Math and Spanish, then relished her time as a teacher and coach in Tilton, NH, and at East Junior High in Andover, MA. She then poured her heart and energy into working at Thompson’s Restaurant in North Andover, MA, and was revered as a friendly, welcoming face for many years. Mary Anne then returned to school at Northern Essex Community College, where she earned a degree in banking. She worked at Pentucket Bank in her adopted hometown of Haverhill, MA, until her health forced her into an early retirement. Four decades of diabetes wreaked havoc with her body, but never her spirit. Her seven brothers and sisters recall her selflessness and many acts of kindness: from helping her mom with babysitting, laundry, and diaper changes, to driving her younger siblings on numerous occasions to deliver Sunday morning newspapers after she had worked a late-night shift. She always took the initiative to volunteer to help, was ever present with words of encouragement and never forgot a birthday or anniversary. Mary Anne played an essential role in helping her sister achieve public office by providing support at home and tirelessly volunteering on many campaigns. She was a second mom to her many nieces and nephews, many of whom called her “Mimi.” She loved babysitting, teaching them to read and bake, and pampering them with trips to the beach, to the berry farm, and out to lunch (while providing their Moms a break)—always including a stop for ice cream. In later years she celebrated their accomplishments, graduations, travels, weddings, and new arrivals with cards, gifts, and supportive comments on Facebook. Mary Anne always put family first, and was a longtime Saturday shopping and travel companion of her mom and her cousin Maureen (Sullivan) Blanchette. She was a great cook and baker who delighted in hosting large holiday events. Her blueberry muffins, Christmas cookies, and Swedish Tea Rings were legendary. Mary Anne loved her beagles Missy and Hunter, and showed them so much love that her vet entrusted two rescue dogs, Gus and Princess, to her care. Mary Anne was a woman of deep faith, which was the force that sustained her through many health crises. She sang in the church choirs at both St. George and All Saints Parish in Haverhill, and when physical presence in church became impossible, she followed the televised Catholic Mass. She was grateful for any opportunity to receive Holy Communion at a hospital or nursing home. Mary Anne fought through many medical setbacks with grace, determination, and a quick sense of humor, which was admired by her family and the myriad of health care workers she encountered. She spent her last few years largely homebound, and passed the time cheering on her beloved Boston Celtics and New England Patriots, playing Scrabble and card games, and doing needlecrafts. Mary Anne is additionally survived by her seven siblings and their spouses: Dr. James L’Italien of Rancho Santa Fe, CA; Claire (L’Italien) Cruwys of Lowell, MA; Joseph (Joanne Cavanaugh) L’Italien of North Andover, MA; Barbara L’Italien (Kevin Hall) of Andover, MA; Patricia (Terry Rybolt) of Danvers, MA; Edmond (Elaine Glynn) L’Italien of Parkland, FL; and Susan (Bruce) Quinn of Jupiter, FL. Mary Anne is also survived by twenty nieces and nephews, their spouses and children, and her many cousins: particularly the Blanchette and L’Italien extended family. We are relieved that her suffering has ended and believe that she is in heaven with her parents, aunts, uncles, and grandparents—likely playing forty-fives and cheering on the Celtics from above. Mary Anne’s family would like to extend a special thank you to her care team at Port Health Care. Services will be held at All Saints Church in Haverhill, Ma. on Saturday February 6th at 11am with a wake to be held prior to the service at John Breen Memorial Funeral Home, Inc., 35 Merrimack St., North Andover, from 9:00 a.m. to 10:30 a.m. For online condolences and other information please visit us at www.breenfuneralhome.com. In lieu of flowers, donations may be made to Joslin Diabetes Center of Boston: www.joslin.org. or to Horizons for Homeless Children, horizonschildren.org/give.

With great sadness we announce the passing of Mary Anne (L&#8217;Italien) Waisanen on January 28 at the age of 64 at Port Health Care in Newburyport, MA, following a period of declining health. She is survived by her husband of 34 years, Waino... View Obituary & Service Information

The family of Mary Anne E. (L'Italien) Waisanen created this Life Tributes page to make it easy to share your memories.

With great sadness we announce the passing of Mary Anne (L’Italien)...