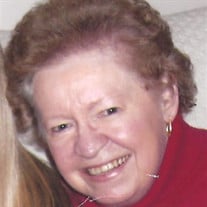 PELHAM, NH – Mary A. (McGovern) Wilson, 84, passed away peacefully Wednesday, September 19, 2018 at her home surrounded by her loving family. Mary was born in Lawrence, MA, the oldest child of the late Francis X. “Red” and Rita (Donahue) McGovern. Raised in the Tower Hill neighborhood, Mary was a graduate of St. Augustine’s Grammar School and St. Mary’s High School, Class of 1951. It was during Mary’s time as a student at Merrimack College that her courtship with the love of her life, John “Jack” Wilson, blossomed and resulted in a marriage of fifty-one plus years until Jack’s passing in 2011. Mary enjoyed a long and successful career in the Lawrence Public Schools as a secretary and administrative assistant, but her true passion was her family. Her greatest joy came from sharing time and laughs with her children and grandchildren at the long-time family home at 18 Byron Avenue in Lawrence, summers at Salisbury and Seabrook Beaches, and her later years in the loving home of her daughter and son in law Maureen and Michael Leal. A voracious reader who instilled in her family a deep appreciation for literature and performing arts, Mary loved the theater and her vast library of great novels. She also never passed up a good card game, especially 45’s. Above all, Mary was a devoted wife, mother, mother-in-law, grandmother, sister, sister-in-law, aunt and friend to all who came to know her. She is survived by her loving children; son Jack and his wife Shari of Andover, MA, daughter Sheila Hudson and her husband Phil of Windham, NH, son Bob and his wife Karen of Amesbury, MA, son Jim of Boston, MA, and daughter Maureen Leal and her husband Michael of Pelham, NH. Mary is also survived by grandchildren; Garrison, KaLeigh and Jillian Wilson; Tara and Parker Hudson; Ally and Grace Wilson; and Joseph and Mackenzie Leal. She also leaves behind her siblings; Ann Neel and her husband Dick; Sheila Meservey and her husband Norman; Terry McGovern; John McGovern and his wife Janet; Jane Perocchi and her husband Chuck; Debbie McGovern; Nancy Hajjar and her husband Tony; as well as several nieces, nephews, and cousins. In addition to her parents and husband, Mary was pre-deceased by her sister Frances O’Neil and infant brother Charles McGovern. Mary’s family would like to express their sincere gratitude to the teams of physicians, nurses and staff at Lowell General Hospital, Lawrence General Hospital, and Merrimack Valley Hospice for the loving care provided to Mary in recent years. A Funeral Mass will be celebrated on Tuesday, September 25, 2018 at 10:00 A.m. in Our Lady of good Counsel Parish-St. Augustine Chapel, 128 Ames St., Lawrence, MA. Burial will follow in St. Mary’s Cemetery, also in Lawrence, MA. Relatives and friends are invited to call on Monday, September 24, 2018 from 4:00 to 8:00 P.M. at the John Breen Memorial Funeral Home, Inc., 122 Amesbury St., Lawrence, MA. Memorial contributions may be made in Mary’s name to the Boston Children’s Hospital Trust, 410 Park Drive, Suite 602, Boston, MA, 02215. To send and online condolence or for more information, please go to www.breenfuneralhome.com.

The family of Mary A. (McGovern) Wilson created this Life Tributes page to make it easy to share your memories.

Send flowers to the Wilson family.