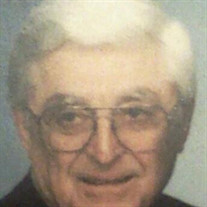 Salem, NH - Lt. Col. Harold Bamford, 88, passed on to his new life on May 1, 2020 after a lengthy illness, eventually succumbing to complications of COVID-19. Born in North Andover, he was the son of the late Joseph and Edith (Andersen) Bamford. Raised and educated in North Andover, he was a graduate of Johnson High School, Class of 1949. He was a member of both the football and baseball teams at Johnson High School. After graduation from High School, Harold enlisted in the United States Air Force where he served his country with honor for 20 years. He was 2nd Lt. Navigator Bombardier who flew on B-36 and B-52 Bombers with the Eighth Air Force Strategic Command. He was called to active duty on September 14, 1953 and served in the Cold War, Korean War and Vietnam War. He retired from the Air Force on February 29, 1972 with the rank of Lt. Col. In his illustrious Air Force career, Harold received numerous decorations and medals including the Air Force Commendation Medal, Bronze Star Medal, National Defense Service Medal, Good Conduct Medal, Vietnam Service Medal and Air Force Outstanding Unit Award. Harold married his High School girlfriend Ruth (Sanford) Bamford on February 13, 1954 when he was a 2nd Lt. in the Air Force. During his career the couple were stationed at multiple states including California, Texas, Maine, Florida, North Carolina and Massachusetts. They were also stationed in Puerto Rico. After his retirement from the Air Force, he came to live in Salem, NH where he raised his family with his wife Ruth. Harold worked at Andover Bank in Methuen, MA and later at Standard Data in Salem, NH until his retirement in 1992. He loved to play golf and was an avid sports fan. He enjoyed watching the games on television, especially those of the Red Sox and Bruins. He also loved to spend time with his grandchildren. Harold was preceded in death by his brother John A. Bamford and sisters Alice Lennon, Ruth Carabello and Janet McCabe. Harold is survived by his wife of 66 years, Ruth (Sanford) Bamford of Salem, NH; his sons H. Joseph Bamford of Nashua, NH; Chad G. Bamford of Salem, NH; his three grandchildren, Joshua M. Bamford and his wife Valerie of North Reading, MA, Jordan T. Bamford of Tewksbury, MA and Jonathan J. Bamford of Marshfield, MA; Great Grandson Theodore M. Bamford of North Reading, MA; and several nieces and nephews. ARRANGEMENTS: Funeral services will be held at a later date. Arrangements are by the John Breen Memorial Funeral Home, Inc., 122 Amesbury St., Lawrence, MA 01841. Donations may be made in his memory to Saint Michael School, 80 Maple Avenue, North Andover, MA 01845 or Eternal World Television Network (EWTN), 5817 Old Leeds Road, Irondale, AL 35210-9768.

Salem, NH - Lt. Col. Harold Bamford, 88, passed on to his new life on May 1, 2020 after a lengthy illness, eventually succumbing to complications of COVID-19. Born in North Andover, he was the son of the late Joseph and Edith (Andersen) Bamford. Raised... View Obituary & Service Information

The family of Lt. Col. Harold Bamford created this Life Tributes page to make it easy to share your memories.

Send flowers to the Bamford family.