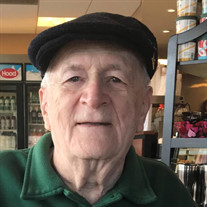 Laurence E. Murphy of Methuen, Massachusetts, &#8220;Uncle Larry&#8221; passed away peacefully on December 19, 2020. He was 88 years old. Laurence was born in Lawrence to the late Russell and Rose (O&#8217;Neill) Murphy. He was a graduate of... View Obituary & Service Information

The family of Laurence E. Murphy created this Life Tributes page to make it easy to share your memories.

Send flowers to the Murphy family.