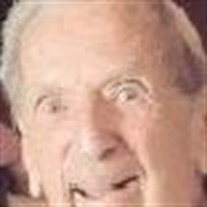 Joseph Donald Nyhan, 93, of Delray Beach, Florida formerly of Lawrence, Massachusetts passed away on Sunday, February 3 rd, 2019 at the Trustbridge-Delray Medical Center in Delray Beach. He was born in Lawrence on July 20 th, 1925 to the late John Joseph and Mary (Manning) Nyhan. Joseph was educated in the local schools and was a graduate of Lawrence High School. After graduating Joseph enlisted into the United States Navy at the age of 17, where he served on the USS Bunker Hill. He worked as a Deputy Sheriff for the Middlesex County for several years. He was an Honorary Member for the Billerica Elks for many years and served as Exalted Ruler. Joseph is survived by his beloved wife of 45 years Patricia (Cerone) Nyhan of Delray Beach, FL His daughter: Judith Nyhan McPherson and her husband Kenneth of Billerica, MA His son: Bradford Nyhan of Florida Several Grandchildren, Great Grand Children, nieces and nephews. Nieces and nephews: Sheila Nyhan, Mary Ellen and Don, John and Pam, Anne Marie and Tim as well as many great nieces and nephews. He is predeceased by his brothers Walter Nyhan, John Nyhan, Philip Nyhan and Charles Nyhan. Relatives and friends are cordially invited to call on Friday, February 8 th, 2019 from 4:00 to 8:00 p.m. at the John Breen Memorial Funeral Home, Inc., 122 Amesbury Street, Lawrence, MA. His funeral mass will be celebrated on Saturday, February 9 th, 2019 at 10:30 a.m. in Saint Mary’s Church in Lawrence, MA. Burial will follow in the Woodbrook Cemetery, 100 Salem Street, Woburn, MA. In lieu of flowers donations may be made to the Wounded Warrior Project, P.O. Box 758517 Topeka, Kansas 66675. For online condolences and other information please visit us at www.breenfuneralhome.com.

Joseph Donald Nyhan, 93, of Delray Beach, Florida formerly of Lawrence, Massachusetts passed away on Sunday, February 3 rd, 2019 at the Trustbridge-Delray Medical Center in Delray Beach. He was born in Lawrence on July 20 th, 1925 to the late... View Obituary & Service Information

The family of Joseph Donald Nyhan created this Life Tributes page to make it easy to share your memories.

Send flowers to the Nyhan family.