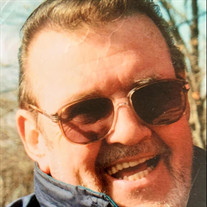 Joseph (Joe) Norton passed away on April 23, 2020 at Cedar View Rehab - Nursing Home in Methuen surrounded by his loving sons. Born in Lawrence, MA to the late Margaret (Cross) and John Norton. Joe was raised in Lawrence and attended St. Rita’s School and graduated from Central Catholic High School in 1955. After his discharge from the Army, Joe began working for Raytheon where he worked until his retirement in 1993. He earned a bachelor’s degree from Fitchburg State while he worked his way up in Materials Management at Raytheon. Joe met his wife Jeannine (Bouchard) Norton while in school and they married in 1959. Together they raised three boys, Michael, Steven, and Timothy. He loved sports, especially the Red Sox and Patriots. During football season you would find him in front of the television rooting the Pat’s on LOUDLY. For many years he and the family spent summer vacations on Lake Winnisquam in New Hampshire. On St Patrick’s Day you could hear him playing and singing Irish music to anyone who would listen. The holidays were a special time where friends and family gathered in their home for food, drink and fun. They welcomed everyone. Joe coached Pop Warner football for many years as he watched his family grow. He loved to play cards, 45’s, and enjoyed Foxwoods, Las Vegas, and would always be found at the tables on many of the cruises he took to Europe, Asia and the Caribbean. Many of the dealers also became friends. Joe volunteered for many years at the Lawrence General Hospital and was the unofficial goodwill ambassador as he carried on with doctors, nurses and visitors on his daily rounds. He also volunteered at the Methuen Village Assistant Living facility playing poker with the residents. Joe enjoyed playing 45’s at the Methuen Senior Center. He was preceded in death by his wife Jeannine and his brother John (Jack) Norton. He is survived by his sons; Michael and his wife Susan, Steven and his companion Heather, and Timothy and his wife Kathryn. His eight grandchildren Connor, Aidan, Liam, Kyleigh, Kaitlyn, Noah, Brennah, and Ian. His dear nieces Karen Frangules, Patricia Unni, Michelle Cotnoir, and two nephews Keven and Ryan Norton. Joe is also survived by his loving companion Brenda Maurais of Methuen. The family wants to thank Cedar View for their professional and kindly care they showed Joe during this stressful time. Contributions can be made in his name to the American Cancer Society or to the American Lung Association. Services are private and are under the direction of the John Breen Memorial Funeral Home, Inc., www.breenfuneralhome.com.

The family of Joseph "Joe" Norton created this Life Tributes page to make it easy to share your memories.

Send flowers to the Norton family.