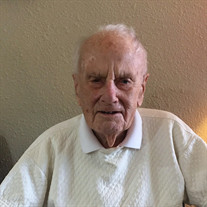 Boynton Beach, FL - Joseph A. Lannan, 104 of Boynton Beach, FL, and formerly of Lawrence, MA, died peacefully November 4th at his home in Boynton Beach, Florida with his wife Grace (Belisle) by his side. Joe was born in Lawrence, MA, son of the late Henry P. and Josephine (Somerly). Raised and educated in Lawrence, he graduated from Lawrence High School and from the Bentley School of Accounting. He spent many years working for the Pacific Mills of Lawrence, Raytheon Co., and lastly for the City of Lawrence from where he retired as City Auditor in 1986. In addition to his wife, Joe is survived by his son Jack and his wife Janice of Seabrook, NH, his brother George and his wife Fran of Methuen, his son-in- law Jim Lawlor of Salem NH, and his daughter-in-law Marie Lannan of North Chelmsford, MA. He was predeceased by his wife of 45 years Josephine (McDermott), his sons Joe and Bill of Lawrence, son Larry of North Chelmsford, his daughter Claire Lawlor of Salem, NH, and his brothers Henry, Arthur, Warren and Bill. He is also survived by his grandchildren, Tim (Gina) Lannan of Methuen, Katie (Terry) Lawton of Methuen, Tom (Lindsay) of Salem NH, Sheri (Sean) Linnehan of Douglas MA, Sean Lawlor of Salem NH, Kathy (Chris) Elsmore of Spring City PA, David, Stephen, and Michelle Lannan all of North Chelmsford MA, many great-grandchildren and nieces and nephews. Joe also leaves the children of his wife Grace, Carol Reynolds of Haverhill, Sandy (Joey) Marlen of Boynton Beach FL, and Barbara (Bill) Dorin of Windham NH. Arrangements: There will be no calling hours. A Funeral Mass will be held on December 6th at St. Patrick's Church in Lawrence, MA at 11:00 a.m. Burial will be in Holy Sepulchre Cemetery in North Andover. In lieu of flowers, donations may be made to Trustbridge Hospice Care, 5300 East Avenue, West Palm Beach, FL 33407 for the wonderful care they provided, or to the charity of one's choice.

The family of Joseph A. Lannan created this Life Tributes page to make it easy to share your memories.

Send flowers to the Lannan family.