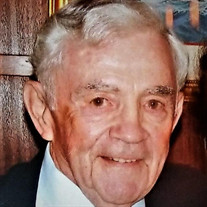 Joseph C. Keleher, 90 A resident of North Andover, died on Tuesday, September 04, 2018 at the Prescott House in North Andover. Joseph was born on September 1, 1928 in Lawrence to Michael & Mary (Scanlon) Keleher. Educated in St. Laurence O’Toole Grammar School, and a Proud Graduate of Central Catholic High School class of 1947. He served in the United States Army during the Korean War. He worked for New England Telephone for over thirty years until his retirement. He was an avid New England Sports fan. He enjoyed and adored his family and spending summer vacations with them and especially traveling to Hampton Beach. He was a member of the Knights of Columbus and the Holy Name Society at St. Michael Church in North Andover. He was a member of the Knights of Columbus and the Holy Name Society at St. Michael Church in North Andover. He leaves his loving wife of 59 years Mary E. (Hanley) Keleher, his daughter: Mary-Beth Smith and her husband Thomas of North Andover, his son: Joseph J. Keleher and his wife Kristina of Merrimac, MA, daughter Maureen A. Bird and her husband James of North Andover, his son Michael P. Keleher and his wife Kara of Amesbury, MA and daughter, Amy Kenneally and her husband Frank of North Andover. Grand children: Katelyn K. Healey, Kara Bostic, Matthew P. Keleher, Andrew T. Keleher, Timothy M. Keleher, Maeve Keleher, Liam J. Keleher, Sean, Jason and Aaron Kenneally, and one great grandson: Connor Joseph Healey. One sister Margaret Caffrey of North Andover and his brother James Wefers of North Andover. And several nieces and nephews. He is predeceased by his son Timothy J. Keleher his sister Betty Keleher and his brother John Keleher. The family of Joseph Keleher would like to acknowledge the kind care and compassion and would like to extend their sincere thanks to the staff at the Prescott House that was given to him during his stay there at their facility. A mass of Christian burial will be said in his name on Friday September 7, 2018 at 10:30AM in St. Michael Church, 196 Main St. North Andover, MA. A burial will follow in the Immaculate Conception Cemetery in Lawrence. Family and friends may call on Thursday, September 6, 2018 from 4:00PM to 8:00PM at the John Breen Memorial Funeral Home Inc. 35 Merrimack St. North Andover, MA, 01841. For more information or to send an online condolence please visit our website at www.breenfuneralhome.com. In lieu of flower memorials can be made to the Alzheimer’s Association at: support.brightfocus.org/alzheimers/donate.

The family of Joseph C. Keleher created this Life Tributes page to make it easy to share your memories.

Send flowers to the Keleher family.