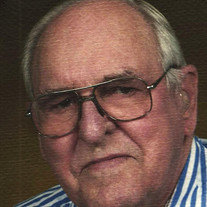 Joseph Alfred "Papa Joe" Dube, 94, of Methuen, Massachusetts passed away on Wednesday, August 8th, 2018 at his home surrounded by his loving family. He was born in Methuen on October 9th, 1923, son of the late Alfred and Mary Louise (Mailoit) Dube. Joe was educated in the local schools. He served in the United States Merchant Marines for 24 years, having served during WWII, Korea and the Vietnam Wars. Joe was a parishioner of Saint Patrick's Church in Pelham, New Hampshire for many years. Joe was the Founder and Owner of Dube Lock Company Incorporated in March of 1954, his first shop was on Haverhill Street, then Franklin Street, Common Street, Essex Street, all in Lawrence, and then on Broadway in Methuen, Massachusetts. He enjoyed his dogs, trains, going to MLA Meetings and Conventions, spending time with his family especially his loving great granddaughter Isabella. His heart was filled with Joy when he travelled to Medjugorie 4 different times with family and friends. He enjoyed trips to Las Vegas with Bob and Gail. Joe was a life member of the Lawrence Elks Local #65, he was a member of the Massachusetts Lock Association where he was Past President and Treasurer, he was a member of the ALOA, as well as being a member for many years of SAVTA. Joe's family would like to thank the Whittier Rehab for their care and compassion and the Cardiac Staff at St. Elizabeth's Hospital for their care and compassion shown Joe while battling his illnesses. His family members include daughter and son Gail and Robert Foster of Methuen, MA. His grandchildren Cheri and Joseph Sciacca of Methuen, MA His beloved great granddaughter Isabella Sciacca of Methuen, MA His beloved dog Metu The entire Foster and Bolduc Families as well as several cousins. He also leaves Mario Liturie, Cara-Jean Donghey, Ross Faucher, and Pat Ferguson. His deceased family members include Robert Faust and Christopher LaPointe. Relatives and friends are cordially invited to call on Monday, August 13, 2018 from 4:00 p.m. to 8:00 p.m. at the John Breen Memorial Funeral Home, Inc., 122 Amesbury Street, Lawrence, MA. His funeral mass will be celebrated on Tuesday, August 14th, 2018 at 11:30 a.m. in Saint Patrick's Church, 12 Main St, Pelham, New Hampshire. Burial will be private. Arrangements are under the direction of the John Breen Memorial Funeral Home, Inc., 122 Amesbury Street, Lawrence, MA. For online condolences and other information please visit us at www.breenfuneralhome.com. In Lieu of flowers memorial contributions may be made to the Lawrence Girls and Boys Club, 136 Water St, Lawrence, MA 01841.

Joseph Alfred "Papa Joe" Dube, 94, of Methuen, Massachusetts passed away on Wednesday, August 8th, 2018 at his home surrounded by his loving family. He was born in Methuen on October 9th, 1923, son of the late Alfred and Mary Louise (Mailoit)... View Obituary & Service Information

The family of Joseph Alfred "Papa Joe" Dube created this Life Tributes page to make it easy to share your memories.

Send flowers to the Dube family.