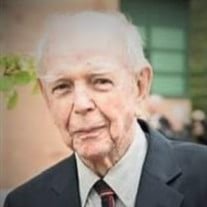 John F. Troy, 96, a longtime resident of Atkinson, NH, died on Sunday, September 27, 2020 at the Elliot Hospital in Manchester, NH following a brief illness. He was born in Lawrence, MA, on November 2, 1923 to William H. & Margaret V. (Carmody) Troy. He was educated in St. Mary’s Grammar School and was a graduate of Central Catholic High School Class of 1941. One of the Greatest Generation, he entered the Army in June 1943. John served as a Combat Medic with Company L, 3rd Battalion, 254th Infantry Regiment of the 63rd Infantry Division. Raising to the rank of Technician 5th Class often referred to as Corporal Technician, he joined the Medical Detachment of the Battalion as a Surgical Tech and Ambulance Driver. He remained as a member of the occupation forces in Germany returning to the US in April 1946. Scouting was a passion for John. He served as Pack 9 Cub Master, Pack and Troop Committeeman, Troop 9 Scout Master, North Essex Council Committeeman and remained active even after his sons had grown to adulthood. He was a Vigil Member of the Order of the Arrow Honor Camper Society. He was awarded the Saint George Medal recognizing his outstanding contribution to the Spiritual development of Catholic youth in the Boy Scouts of America and the Silver Beaver Award recognizing his Council Level impact on the lives of youth through distinguished service. Nothing brought John more joy than to be surrounded by his large family. Predeceased by his brothers William H. Troy and Thomas J. Troy, John embraced the role of family patriarch, historian and storyteller to his many nieces and nephews. He devoted countless hours researching and documenting his family ancestry and was ever proud of his Irish heritage. As a member of the Ancient Order of Hibernians, James T. O'Reilly Division 8, he was recognized as Irishman of the Year for his many years of dedication and service. Following his retirement from Raytheon Corporation as a Configuration Manager, John could be found every Friday morning enjoying breakfast alongside the other faithful members of the ROMEO Club. John loved to travel and enjoyed many trips throughout the Unites States and Europe with his close friends and the love of his life, Connie with whom he shared 49 wonderful years of marriage. John was predeceased by his loving wife, M. Constance (Carroll) Troy. He was also predeceased by his sons John D. Troy and Thomas M. Troy. He is survived by his son William J. Troy and his wife Karen, daughters Constance and her husband Bernard Godbout, Kathleen and her husband J. Michael Lawrence, daughters-in-laws Elizabeth Troy and Joyce Troy. His eight grandchildren Kristin DiMarino and her husband Peter, Brian Troy, Timothy Troy and his wife Danielle, Lauren Bergeron and her husband Adam, Mark Godbout, Jessica Godbout, Jared Lawrence and his wife Cherilyn, and Joshua Lawrence. His twelve great grandchildren, Ashley, Emily, Kaylee, Mackenzie, Madison, Genevieve, Jackson, Liam, Gabriel, Luca, Teagan and Willa will miss their Papa T dearly. Funeral services are private. Friends and family may call on Thursday, October 1, 2020 from 4:00PM to 8:00PM at the John Breen Memorial Funeral Home Inc. 122 Amesbury St. Lawrence, MA. 01841. For more information or to send an online condolence please visit our website at: www.breenfuneralhome.com In lieu of flowers memorial contributions can be made to Ancient Order of Hibernians, James T. O'Reilly Division 8 scholarship fund.

The family of John F. Troy created this Life Tributes page to make it easy to share your memories.

Send flowers to the Troy family.