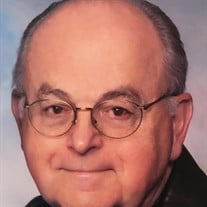 John “Jack” T. Sansoucie, 86, a resident of Windham, NH and formerly of North Andover for over 50 years passed away on Monday, August 2, 2021, at the Massachusetts General Hospital in Boston. Born in Haverhill, MA and educated in the Haverhill Schools, Jack was a graduate of Haverhill Trade School. He had worked as a printer in the Composing Room at the Lowell Sun for over 30 years. He had also worked as the Assistant Foreman in the Composing Room. Jack’s last employment was with Auto-use as a runner right up until the covid outbreak. He was an avid sportsman and athlete and would make it a point to be at every practice for both his children and grandchildren. Jack skied right up to the age of 70 and enjoyed going with his wife on trips to Las Vegas, Atlantic City and more recently to Connecticut. They also had a home on Lake Winnisquam in New Hampshire and enjoyed many summers on the water. One of Jack’s greatest joys was being with his children, grandchildren and his three great-grandchildren. Jack was the son of the late William C. and Albertine M. (Beauparlant) Sansoucie as well as the widower of Genevieve “Jean” (Poole) Sansoucie who passed away in November of 2015 and was the love of his life for over 60 years, family members include his son John Sansoucie and his wife Jan of Windham, NH, his daughter Gayle Murphy and her husband Kevin of Seabrook, NH, four grandchildren; Drew Murphy and his wife Dominique of Melrose, MA, Laura Murphy of New York City and Cathryn Sansoucie and Matthew Sansoucie both of Windham, NH. Jack is also survived by his three great-grandchildren: Jack, Theo and Cece and his sister Carol Stephan of Ellenton, FL. Jack was father to the late William “Billy” Sansoucie who passed away in 1975 and was predeceased by 7 brothers and sisters. brothers and sisters. A Funeral Service will be held on Tuesday, August 10, 2021, at 11:30 A.M. at the John Breen Memorial Funeral Home, Inc., 35 Merrimack St., North Andover, MA. Burial will follow in the Ridgewood Cemetery, 177 Salem St, also in North Andover. Family and friends are invited to call at the funeral home prior to the services from 9:30 A.M. to 11:30 A.M. To send an online condolence or for more information, please go to www.breenfuneralhome.com.

John &#8220;Jack&#8221; T. Sansoucie, 86, a resident of Windham, NH and formerly of North Andover for over 50 years passed away on Monday, August 2, 2021, at the Massachusetts General Hospital in Boston. Born in Haverhill, MA and educated in... View Obituary & Service Information

The family of John Thomas Sansoucie created this Life Tributes page to make it easy to share your memories.

Send flowers to the Sansoucie family.