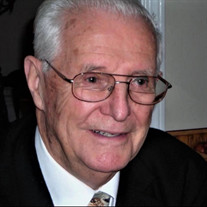 John Edward Gallant, 99, died peacefully on March 18, 2019 , leaving behind a legacy of love and laughter, music and faith, and a lifelong devotion to family. Son of Aubin and Mary Ann (Daley) Gallant, he was born and raised in Bradford, Massachusetts. In August, 1941, he wed Ellen Murphy, beginning a loving marriage that lasted more than 74 years until her death in 2016. Their marriage was an inspiration to all. No matter what problems they faced, they faced them together. They loved each other steadfastly and shared that commitment with their children, grandchildren, great-grands and great-great-grands, a legacy of security for life, bolstered by the faith they shared together. Shortly after Pearl Harbor, John joined the Navy, following his strong sense of duty to serve where needed. His electrical and mechanical skills led to work at the Portsmouth Navy Yard. Later, he served as electrician on the USS Hammann, a ship he had helped build, sailing the Murmansk Run on the North Atlantic until V-E Day. The ship was reassigned to the Pacific theater where he served until Japan surrendered in August, 1945. John’s postwar work included the Portsmouth Navy Yard and CBS Hytron. During the Korean conflict, he was recalled to Navy service on the USS Mellette. Following that, he owned a company that sold heating oil in the winter and tonic in the summer. Then, John spent almost ten years working for companies that manufactured vacuum tubes and integrated circuitry, helping spread the early growth of computers throughout the Midwest and the East Coast. In 1963, John began a new career as a Realtor, then owner of Hall-Gallant Realty, Gallant Real Estate Counseling and Gallant Associates. For more than 50 years, until he was 95 years old, he was active in the real estate profession, serving in leadership roles in several professional associations, honored as Massachusetts Realtor of the Year and recipient of the Lions Club Melvin Jones Award, recognizing his years of service to the profession and the community. Music filled John’s life. He enjoyed seeing his growing family sing or play instruments, especially the organ. Whatever his mood, his heart spoke through the keyboard, filling the house with music. Favorite evenings involved family and friends gathered around the organ, singing old standbys. A lifelong Catholic, he was active in the Men of Saint Joseph Group of Our Lady of Good Counsel Parish in Methuen. During his recent stay at the Prescott Nursing Home, he continued his tradition of reaching out to people, serving on the Residents’ Board, participating in service projects, welcoming visitors and praising the staff members who cared for him and the other patients. John was preceded in death by his wife Ellen, his parents, his infant son John Joseph, his sister Madeline Cecelia Walker, his brothers Albin Gallant and Maurice Gallant. He is survived by seven children: John David Gallant (Brenda), Sheila Aitken, Nancy Gallant (George Gardner), Mary Ellen Obreiter (William), Kathleen Baril, Virginia Toland (Daniel) and Julie Veilleux (James); and also by 17 grandchildren, 28 great grandchildren, 1 great-great grandchild and another on the way, by his sisters-in-law Grace Gallant and Norma Gallant, and by numerous friends and family members who will miss his laughter, warmth, open heart and zest for life. Friends and family are invited to attend visiting hours at John Breen Memorial Funeral Home, Inc. 122 Amesbury St. Lawrence, MA on Friday, March 29, 2019 from 4:00PM to 8:00PM. For more information or to send an online condolence please visit our website at: www.breenfuneralhome.com. A funeral Mass will be celebrated at Our Lady of Good Counsel Parish (St. Theresa Church) in Methuen on Saturday, March 30 at 11:00 a.m. with interment following at St. Patrick Cemetery in Haverhill.

John Edward Gallant, 99, died peacefully on March 18, 2019 , leaving behind a legacy of love and laughter, music and faith, and a lifelong devotion to family. Son of Aubin and Mary Ann (Daley) Gallant, he was born and raised in Bradford,... View Obituary & Service Information

The family of John Edward Gallant created this Life Tributes page to make it easy to share your memories.

Send flowers to the Gallant family.