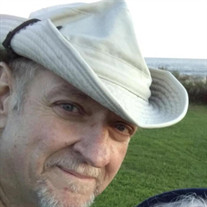 John S. Dore, 60, of Hampstead, NH and previously from Methuen, MA, passed away on Friday, May 10, 2019, after a long battle with leukemia, at Tufts Medical Center, with his wife and children by his side. Born in Methuen, MA, he was the beloved son of the late Wilfrid and Doris Dore. John was a software engineering manager for many years at Digital, Compaq, and Hewlett Packard until his retirement. He later went on to a second career as a physical education and computer teacher jobs which he said truly filled his soul. Outside of spending time with his family, John’s true love was Aikido. John was the owner and chief instructor of Methuen Aikido and Ki Rei Shinkan Aikido. In 2015, John earned the rank of Go Dan, 5th degree black belt from Hombu Dojo in Japan. He truly enjoyed chatting and making and sharing memories with his wife and four children. He loved showing his son Nick new Aikido moves to effortlessly bring someone to their knees, sharing breakfasts and lunches with his sons Paul and Jay, jamming on the guitar or piano with his daughter Danielle, and drawing and playing with Legos with his grandsons. He adored spending time with his three brothers by choice, Chuck, David, and Doug, while they had intense conversations, played Cribbage and Go, or fixed yard equipment. John looked forward to getting together with his “Nashua Cousins,”playing cards, and laughing until it hurt while they all reminisced about the joys of growing up together. John was also an artist and a musician, and he enjoyed archery and the art of Iaido. His art can be found hanging in friends’ homes, imprinted on his grandson’s shirts, and created on notes that he wrote daily to his wife Patti. He is survived by his wife of forty years, Patti Dore; sons Nicholas Dore and his wife Suzette, James Dore and his fiancé Marissa, Paul Dore; his daughter Danielle Dore and her partner Alfonso. He was the very proud Pépère to Nicholas, Evan, and Talen. John also left behind many cherished family members including Tammy and Chuck Wilson, Doug and Joan Therrien, Pam and David Mesquita, nieces and nephews and many longtime friends. John’s family would like to thank his bone marrow transplant donor, Allen. Allen’s selfless gift gave John four wonderful years of life to make treasured memories with his family to carry them on when he was gone. The family also wants to thank Dr. Kellie Sprague and her terrific team at Tufts Clinic, North 8, Neeley Infusion Center, and the team in the Tufts Medical ICU. John had the best care and was treated with respect and love by everyone involved. His family could not have asked for better care than what he received. In lieu of flowers or any other gifts, the family requests that donations be made in John’s memory to the Millett Yellow Rose Fund and sent to Dr. Kellie Sprague, Tufts Medical Center, Box 245, 800 Washington Street, Boston, MA 02111. This fund was set up by two families who had loved ones who were patients of Dr. Kellie Sprague. One hundred percent of the fund helps bone marrow transplant patients who can’t afford treatment. John always believed in giving back, and his wish when he was gone was to help others who were transplant recipients. All are invited to attend John's Memorial Mass on Saturday, May 18, 2019 at 10:00 A.M. in St. Michael's Church, 196 Main St., North Andover, Mass. To leave an online condolence or for more infomation, please go to www.breenfuneralhome.com.

John S. Dore, 60, of Hampstead, NH and previously from Methuen, MA, passed away on Friday, May 10, 2019, after a long battle with leukemia, at Tufts Medical Center, with his wife and children by his side. Born in Methuen, MA, he was the beloved... View Obituary & Service Information

The family of John S. Dore created this Life Tributes page to make it easy to share your memories.

Send flowers to the Dore family.