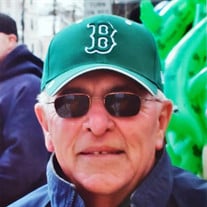 Retired Lt. Firefighter John J. “Rubber” Burton, 81, died at High Pointe House Hospice in Haverhill with his loving family by his side on February 13, 2019 from complications of COPD. He was the beloved husband of Jeanne M. (Rainville) Burton for 59 years. Born in Lawrence on June 4, 1937, he was the son of the late John E. and the late Marguerite (Fountain) Burton. He was predeceased by his twin brother, James “Fluffy” Burton and his sister Elizabeth Beauregard. He graduated from St. Patrick Grammar School and Central Catholic High School. Jack was a proud member of the U.S. Coast Guard from 1955 to 1959. He loved golf, the Red Sox and especially the Patriots. He was a third generation firefighter, appointed as a Reserve Firefighter in Lawrence in 1963 and made a Permanent Firefighter in 1969.He also served many years on the Arson Task Force, a job he loved. Jack always said that being a firefighter is the best job in the world. His firefighting brothers meant the world to him. Lt. Burton was named Firefighter of the Year in 1976 and again in 1978. Jack will be deeply missed by his children John Jr. and his wife Stephanie of Virginia, his daughter Peggy and her husband Dan Petty of Lawrence, and son Paul and his wife Ann Tirrell as well as his late brother’s wife, Peg Trainor-Burton. He also leaves grandchildren Jason Cohen and Madisen Burton; Tim, D.J. and his wife Charlene, Christiane Petty; great grandchildren Daniella and Benson Petty. He also leaves many cousins, nieces, nephews and dear friends. Friends and family may call on Monday, February 18, 2019 from 4:00PM to 7:00PM at the John Breen Memorial Funeral Home Inc. 122 Amesbury St. Lawrence, MA, 01841 for more information or to send an online condolence please visit our website: www.breenfuneralhome.com. A funeral mass will be celebrated on Tuesday, February 19, 2019 at 11:00AM in St. Patrick's Church, 118 South Broadway, Lawrence, MA. A burial will follow in the Immaculate Conception Cemetery, in Lawrence, MA. In Lieu of flowers memorials contributions can be made to the Salvation Army Corps, Lawrence Chapter, 250 Haverhill St. Lawrence, MA, 01840.

Retired Lt. Firefighter John J. &#8220;Rubber&#8221; Burton, 81, died at High Pointe House Hospice in Haverhill with his loving family by his side on February 13, 2019 from complications of COPD. He was the beloved husband of Jeanne M. (Rainville)... View Obituary & Service Information

The family of John J. "Rubber" Burton created this Life Tributes page to make it easy to share your memories.

Send flowers to the Burton family.