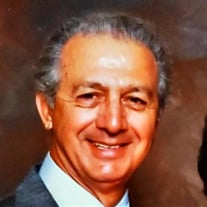 John C. Budron, 96, a resident of Salem, NH, died on Tuesday, November 12, 2019 at the Holy Family Hospital in Methuen, surrounded by his loving family. He was born in Lawrence, on April 2, 1923 to Charles & Adele (Hajjar) Budron. Educated in Lawrence local schools he was a graduate of Lawrence High School. After high school he attended the University of New Hampshire. During his attendance at the university he elisted into the United States Army during World War II serving three years with the 61st Division ranking as Sergeant stationed in Germany, France and Belgium. While in the Army he was trained at Stanford University in foreign languages. During training he was awarded sharp-shooter honors. While awaiting release from his military service he played football in Germany, France and Belgium & became the division sports editor. He had several careers during his lifetime working for Morton Salt, Buyrite, Sunnybrook Farms, Budron Construction and ending his career with Metropolitan Life Insurance Company. He is the husband of the late Rose (Hajjar) Budron married for 62 years, he leaves four children, Kathryn Gibney and her husband John of Methuen, John M. Budron of Salem, NH, Jayne Woodman and her husband Robert of Windham, NH, and Susan Covey and her husband Michael of Windham, NH. He also leaves two sisters; Joan Manning and her husband Shale of Florida, and Elaine Kelly of Virginia, and sister-in-law Rosalind Hajjar of Hudson, NH, as well as 9 grandchildren 12 great grandchildren and several nieces and nephews. He was predeceased by his brother Howard Budron, his sister Beatrice Budron and great granddaughter Aria Covey. Friends and family are invited to attend a funeral mass on Friday, November 15, 2019 at 10:30AM in St. Anthony Maronite Church, 145 Amesbury St. Lawrence, MA. Burial will follow in St. Anthony Cemetery in Methuen. Funeral arrangements are under the direction of the John Breen Memorial Funeral Home, Inc. 122 Amesbury St. Lawrence, MA. 01841. For more information or to send an online condolence please visit our website at: www.breenfuneralhome.com. In lieu of flowers memorial contributions can be made in his name to: St. Jude Children Hospital, by phone: 1-800-478-5833 or online at: stjude.org.

John C. Budron, 96, a resident of Salem, NH, died on Tuesday, November 12, 2019 at the Holy Family Hospital in Methuen, surrounded by his loving family. He was born in Lawrence, on April 2, 1923 to Charles & Adele (Hajjar) Budron. Educated... View Obituary & Service Information

The family of John C Budron created this Life Tributes page to make it easy to share your memories.

Send flowers to the Budron family.